For many travelers, Ayutthaya serves as a convenient starting point for an epic itinerary exploring ancient ruins in Southeast Asia… not for me though. Not having seen Ayutthaya yet was a bit odd considering that I had already explored many of the major ancient cities and temple ruins in Southeast Asia like Angkor, Bagan, Borobodur, Prambanan, and even Sukhothai.

I finally had my chance when I traveled to Thailand on my way to India. I was about to spend one month each in India and Nepal, and wasn’t up for a crazy itinerary just yet. I knew traveling to these two countries could potentially be too overwhelming for me (and it was!). So, my gameplan in Thailand was to spend a relaxed stay in Bangkok and somewhere else nearby.

Ayutthaya was the perfect fit.

After my arrival in Thailand, I got on a local bus to Ayutthaya from Bangkok’s Northern Bus Terminal. Getting to popular destinations like Ayutthaya was easy even for non-Thais, like me, because of its popularity and omnipresence of government tourist information booth at transport terminals.

The ride only took around two hours, and made its last stop beside Ayutthaya’s Chao Phrom Market, which was within an easy walk to many guesthouses and hotels.

I stayed in Ayutthaya for six days, which was more than enough time to see the major sights. One day was probably enough to explore Ayutthaya’s old city but I didn’t mind staying longer because I enjoyed exploring the ancient ruins and it was very cheap to travel there.

The ruins of the ancient city were some of the most impressive I had seen throughout Southeast Asia and because it was interwoven almost seamlessly with the “new city,” a visit provides an excellent immersion to Thai culture … including awesome Thai food. 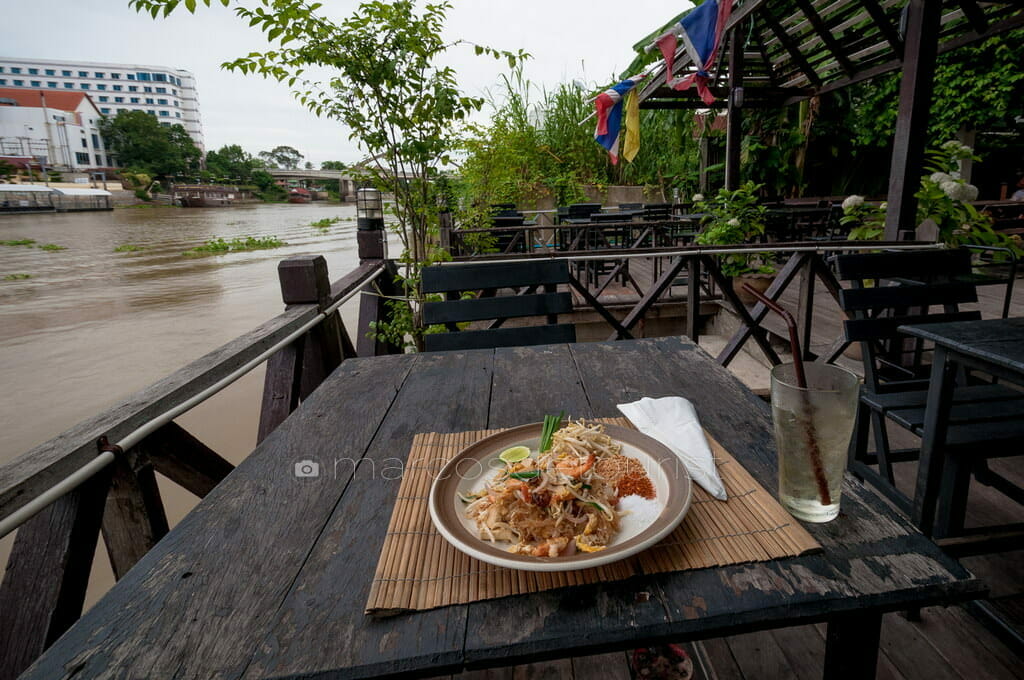 One of the many meals I ate at Chao Phrom Market. They were delicious and only cost US$1-2.

Founded in the year 1350, Ayutthaya served as the second capital of the Kingdom of Siam. It was widely known as the “Invincible City” because of its strategic location on an island bounded entirely by three big rivers.

By the 16th century, Ayutthaya had become the largest city in the world with over 1 million inhabitants and a trading capital in Asia. Its decline came abruptly when the Burmese (Royal army of present-day Myanmar) invaded the city and almost completely burnt the city down to the ground.

What’s left today are the monumental ruins that serve as remnants of its former glory. UNESCO had listed the Historic City of Ayutthaya as a World Heritage Site.

Getting around town by bicycle was easy and popular since most of the sights were clustered in a relatively small area. Renting a bicycle for a whole days costs B40 only.

The admission fee to the major temple ruins costs up to B50 per site. I bought a composite ticket for B220, which included admission to these five sites: Wat Mahathat, Wat Ratcha Burana, Wat Phra Ram, Ancient Royal Palace Complex, and Chantharakasem National Museum.

Cute Baby Elephant. Haven’t really gotten any urges to ride these majestic creatures during my travels.

Wat Chaiwatthanaram, the first major site and most impressive ruined temple that I visited in Ayutthaya.

The inner parts of the temple complex was closed off for conservation works. So, visitors could only see the towering spires from a distance.

Closer view of the chedi and (central) prang at Wat Chaiwatthanaram.

Saint Joseph Catholic Church, a reminder of the wide variety of people that settled in Ayutthaya.

View from the towering prang.

Main inner chamber inside the prang of Wat Phutthaisawan.

Viharn of the Reclining Buddha.

Aboard a local ferry crossing with two school children and my rented bicycle.

Found this shipyard full of traditional wooden boats beside Wat Phanan Choeng. I could not resist stopping by to take photos.

Waiting for the sunset, which didn’t appear during my whole stay at Ayutthaya.

Local devotees putting a golden cloth over the reclining Buddha.

Most of the Buddha images surrounding the towering chedi were covered with these vibrant colors.

Inside the chedi at Wat Yai Chai Mang Khon.

Elephant tour passing by Wat Khueedao, located at the eastern outskirts of Ayutthaya.

Taking a long rest under the shade.

Wat Maha That, probably the most popular site in Ayutthaya.

Most Buddha statues at Wat Mahat That were beheaded, when the Burmese invaded the city

Me at Wat Maha That

Wat Ratcha Burana, located next to Mahat That.

View from the central prang at Wat Ratcha Burana

Much of the Ancient Royal Palace was already in ruins.

Wat Pakkran, located at the northern outskirts of the city and was seemingly abandoned.

Queen Suriyothai Monument, not really worth the long bicycle ride.

Wat Phu Khao Thong, which looked very similar to the towering pagodas of Bagan in Myanmar.

Chantharakasem National Museum. I wasn’t able to explore the museum because I arrived after closing time.

On my way back to Bangkok, I traveled by train. It was my first time to experience the railways in Thailand … a very sane intro to what I would experience weeks later on the Indian railways.

EBC-Gokyo Circuit Trek: 19 Days Hike to Everest Base Camp &…
20 Places to Visit in Ayutthaya + Things To Do