Travelers who love marveling at ancient architectures often do not leave Cambodia disappointed. Most arrive here under the allure of visiting Angkor Wat, a massive and elaborate temple that is certainly at par with the world’s most famous ancient wonders.

Incredible as it was, Angkor Wat was just one of the many astounding feats of engineering and artistry built in the ruined City of Angkor. Ruled by the Khmer kingdom, Angkor was the most extensive urban complex of the pre-industrial world, and, although much of the city had already vanished, what survives until this day still continues to impress.

I have traveled twice to Cambodia, mostly to visit Siem Reap, the gateway to Angkor. Except for major transport hubs, it was a rare thing for me to re-visit destinations considering the vast number of other new places at my choosing… I simply could not get enough of exploring the temples of Angkor.

On my first visit, I did the little circuit (or le petit circuit, if you must), and then followed it up with a tour around the big circuit (le grand circuit), and then the temples of the Rolous group. Since I traveled by land from Laos on my second visit, I was also able to see a bit of the Cambodian countryside while transiting through the riverside town of Kratie, and then Phnom Penh, the royal capital of the country.

Cambodia sits right in the middle of the heavily worn-out Thailand-Cambodia-Vietnam section of the Indochina trail. This convenience made it easy to explore the country, and also to meet other travelers. I loved traveling in Cambodia because it was a cheap destination with lots of interesting cultural experiences to offer.

Here are 25 of my best travel photos that show Cambodia really is the Kingdom of Wonder: 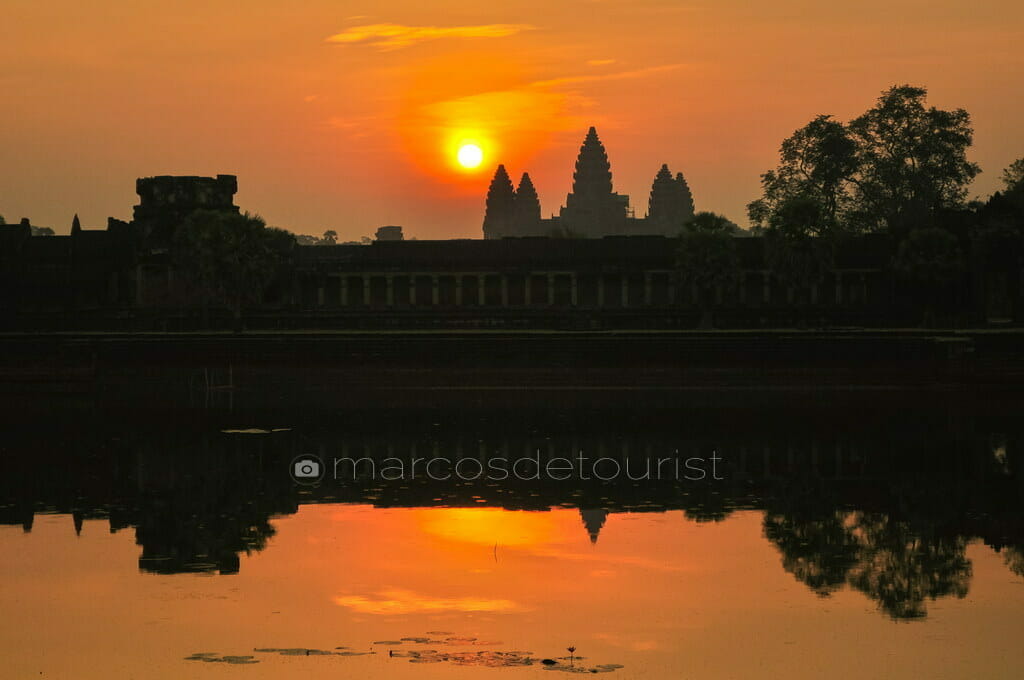 Silhouette of the lotus-shaped spires of Angkor Wat against the sunrise — The perfect way to start a tour of the lost city of Angkor. 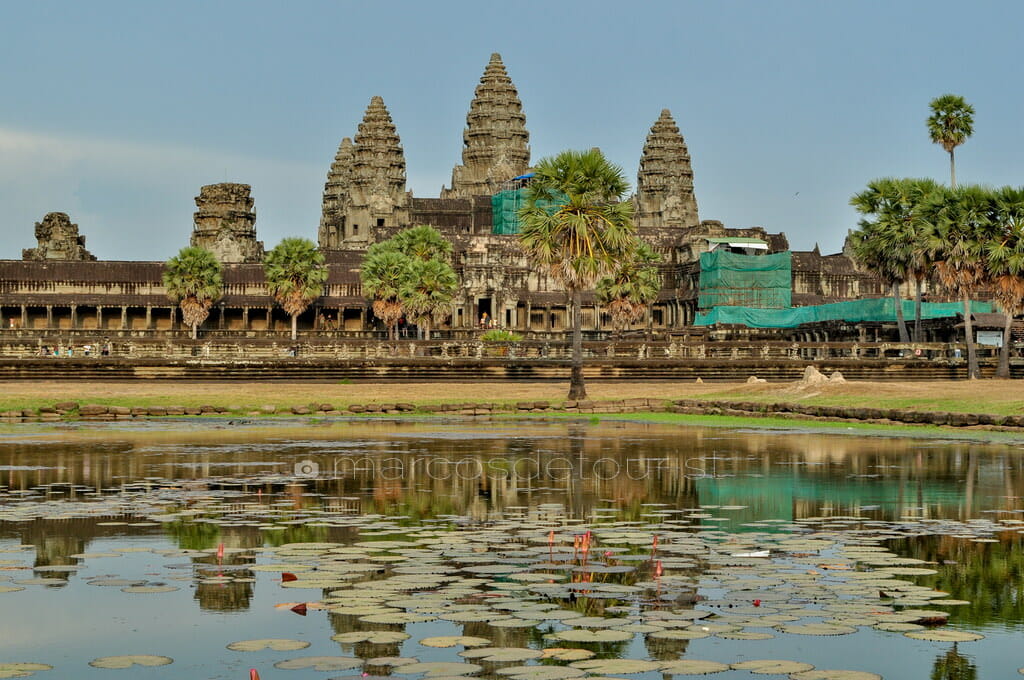 Angkor Wat with its reflection mirrored on the lotus-filled water of the “reflecting pond.” The temple was built to resemble Mount Meru, the abode of the gods in Hindu mythology. 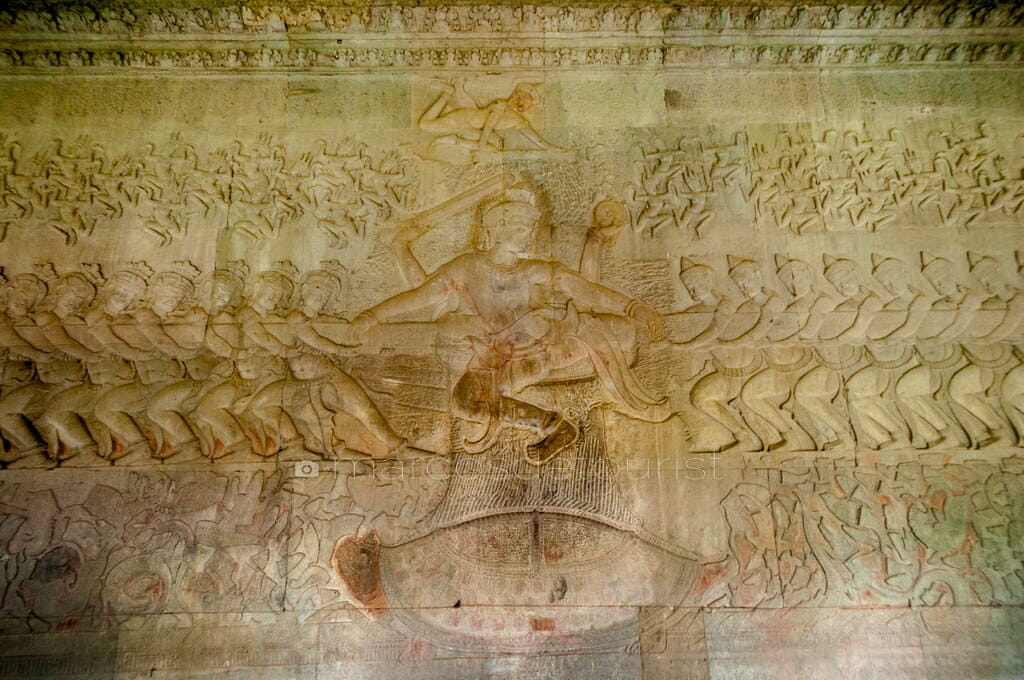 “Churning of the Ocean of Milk,” depicted on stone carvings at Angkor Wat. This insanely intricate image tells the Hindu story of Vishnu leading deities called Devas and Asuras on the epic effort of stirring up the ocean of milk to free precious objects lost within, including the elixir of immortality. 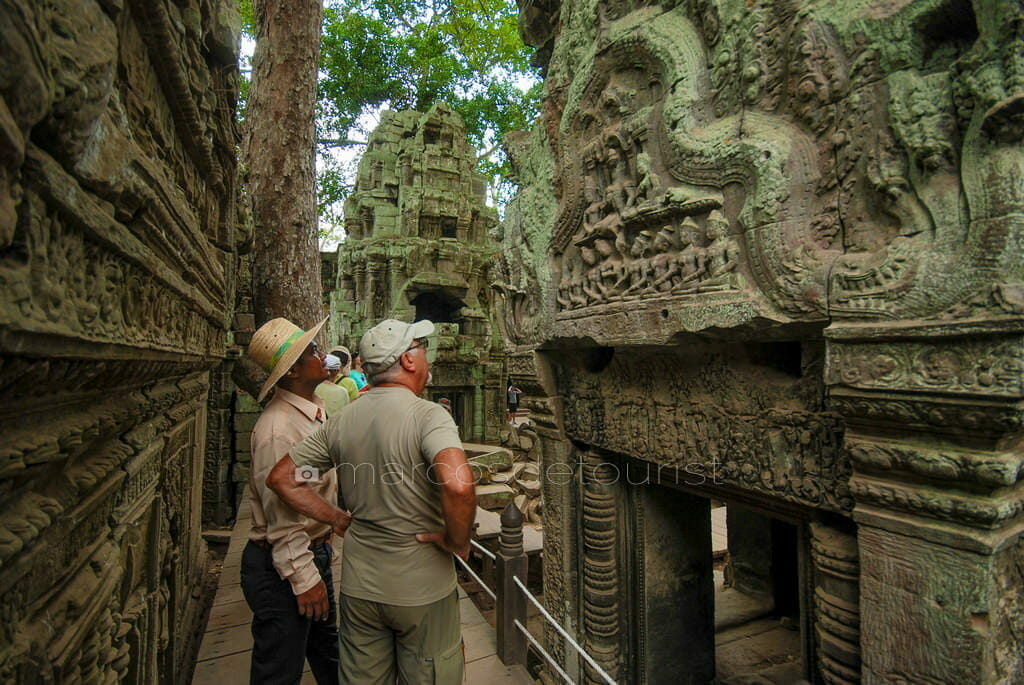 Ta Prohm pretty much captures the spirit of movies like Indiana Jones and Tomb Raider. It was my favorite temple by far. Inside was a series of maze-like crumbling corridors and galleries filled with stone carvings. One famous carving depicts what appears to be a stegausarus (not in photo).

5. The Forest Taking Over Ta Prohm 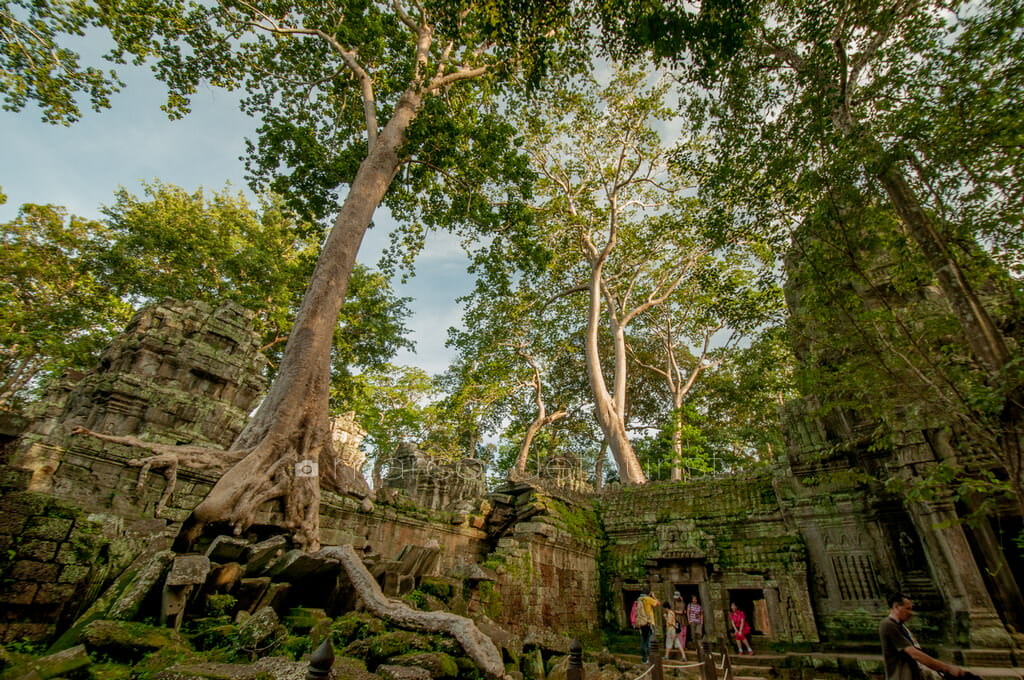 Centuries of human abandonment allowed gigantic forest trees to engulf parts of the temple walls and towers at Ta Prohm. 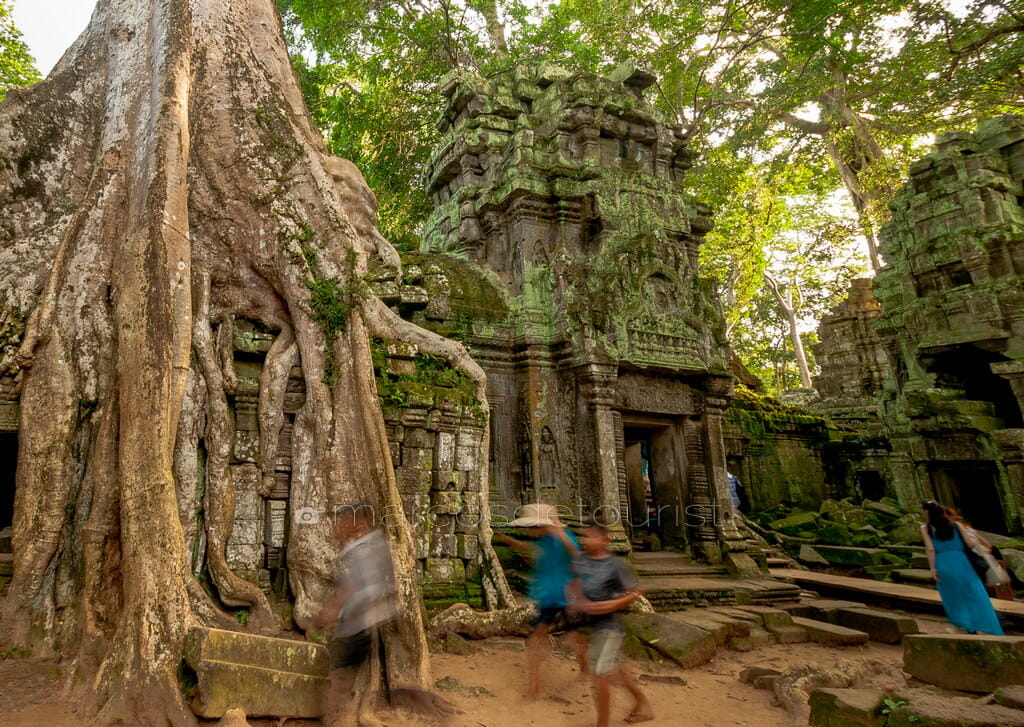 Local children playing and tourists exploring Ta Prohm. It was the perfect place to fantasize about lost worlds. 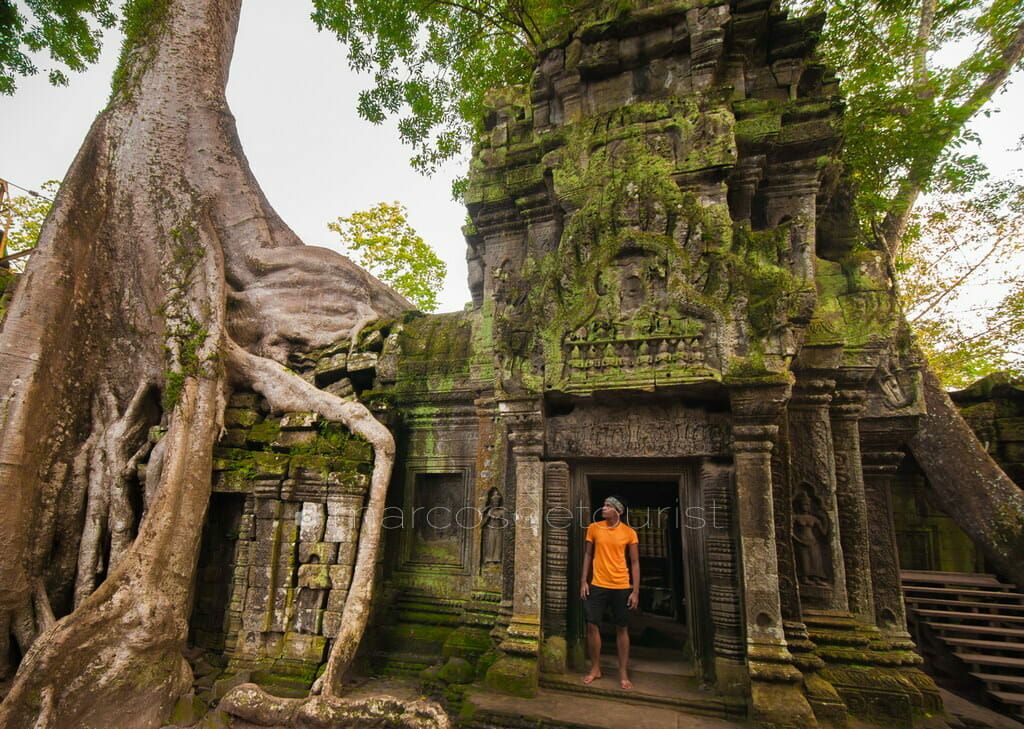 An extended visit meant being able to visit Ta Prohm and other temples on certain times when tourist crowds were nowhere to be found. 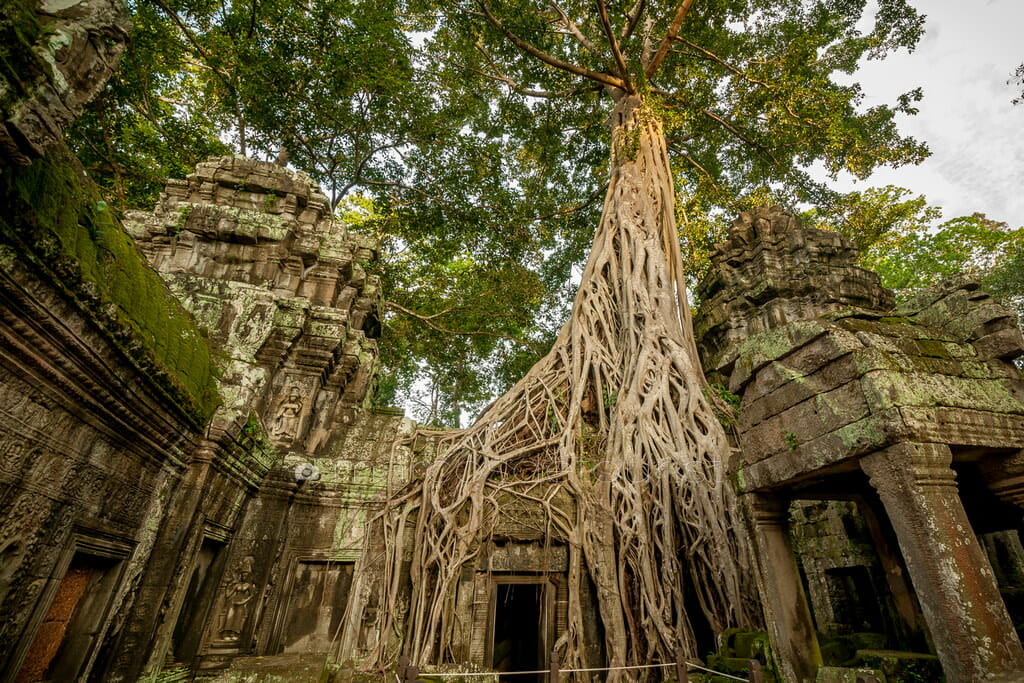 The most famous and captivating part of Ta Prohm temple. This spot any many others in Angkor appeared in the epic movie, Tomb Raider, starred by Angelina Jolie. 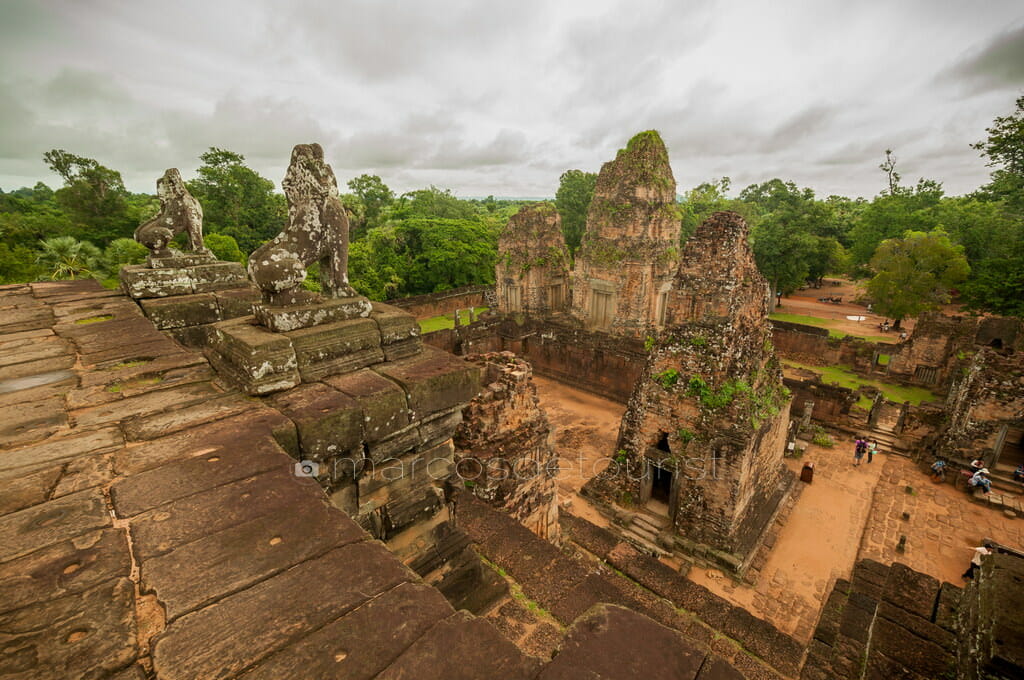 Glorious view from the top of Pre Rup, one of the temple mountains in Angkor. 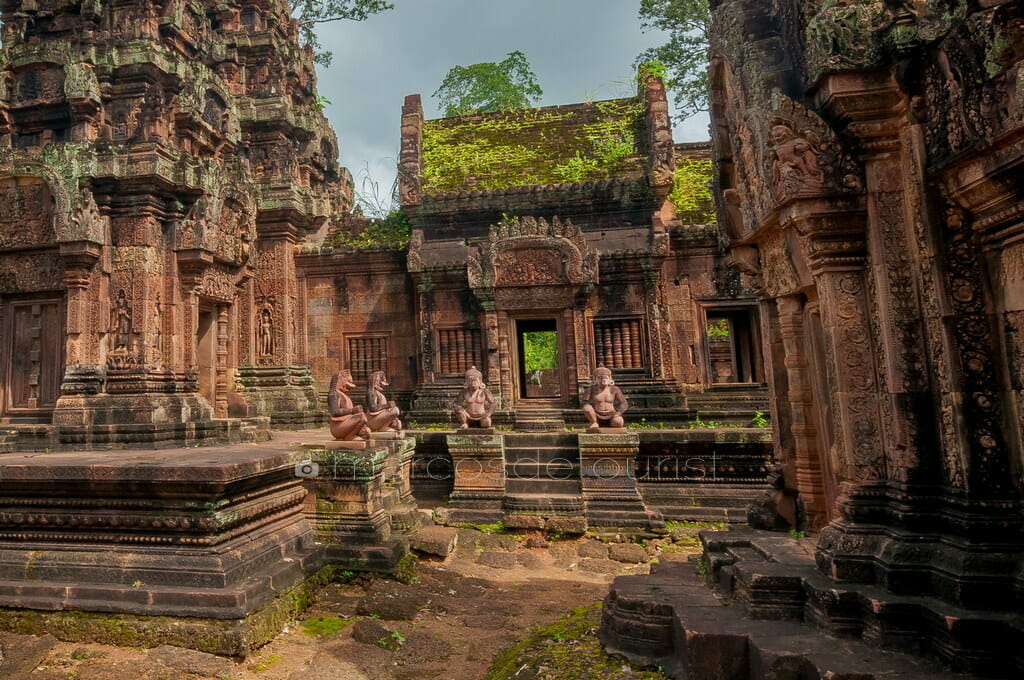 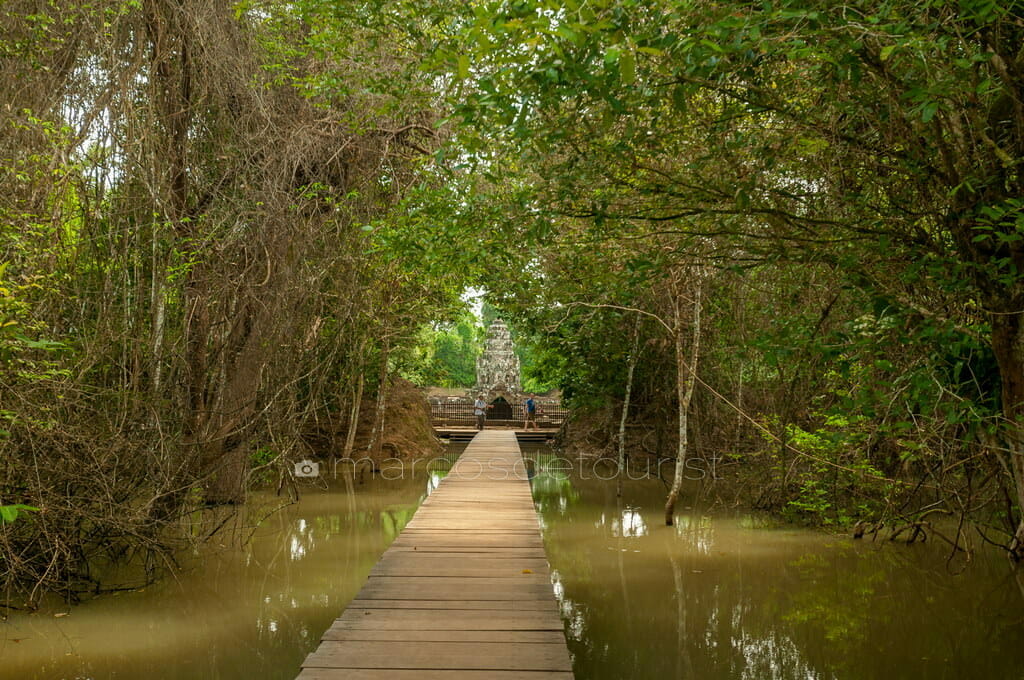 Hidden inside a huge flooded forest, Neak Pean stands at the center of Preah Khan baray, part of the complex waterworks used to support the ancient metropolis. 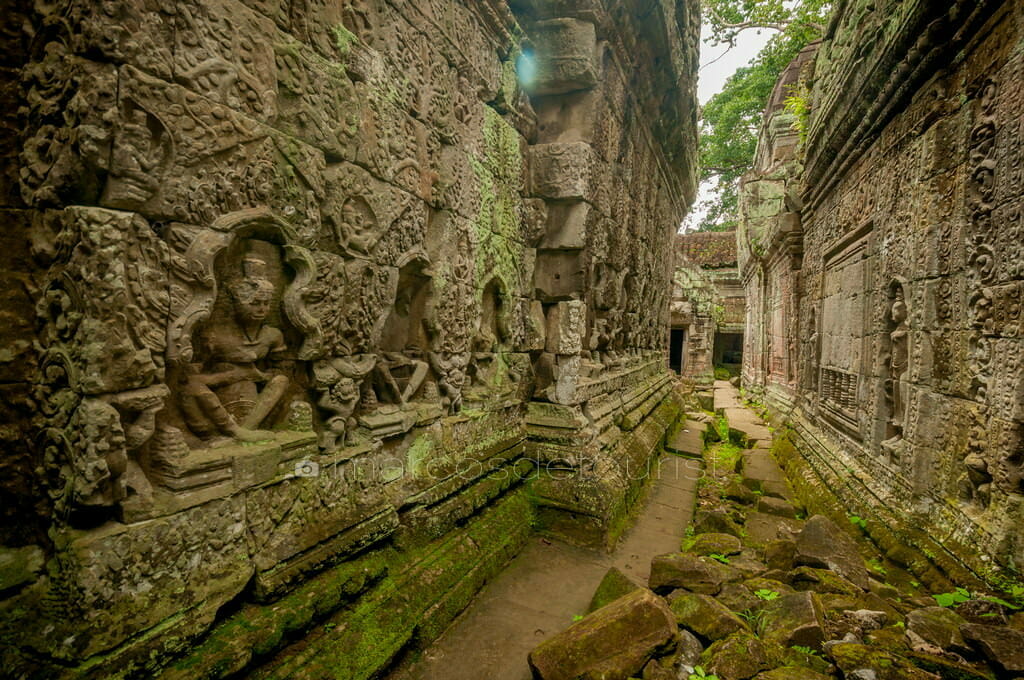 Halls filled with deteriorated stone carvings at Preah Khan, one of the lesser visited but interesting temples along Angkor’s Big Circuit tour route. 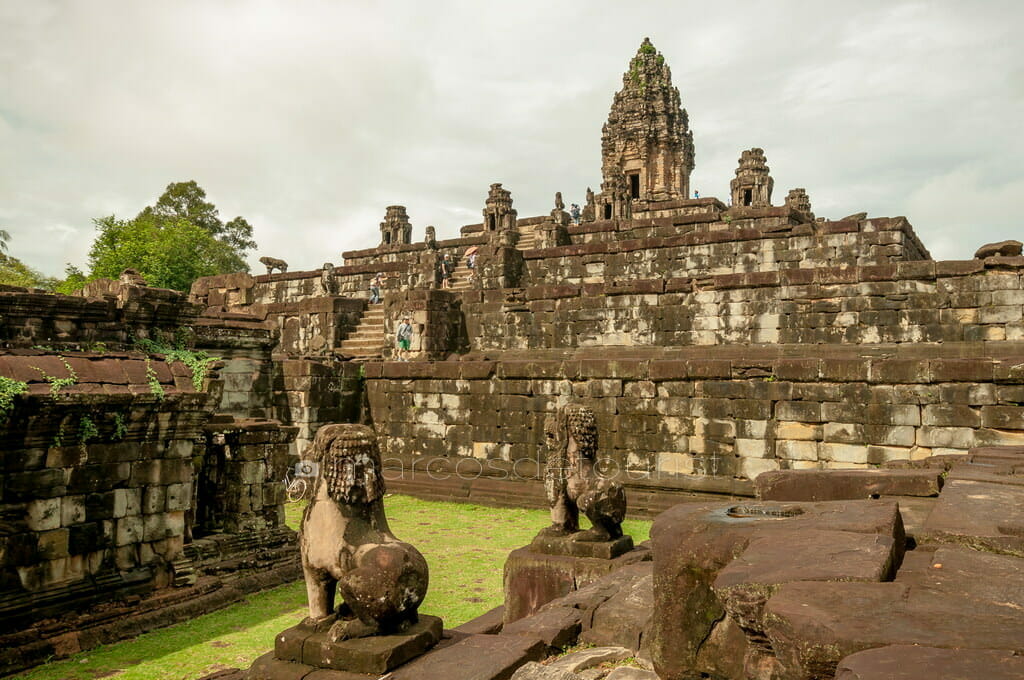 Bakong was the first temple mountain constructed in Angkor. It can be found in the Rolous group of temples on the opposite side of Siem Reap. 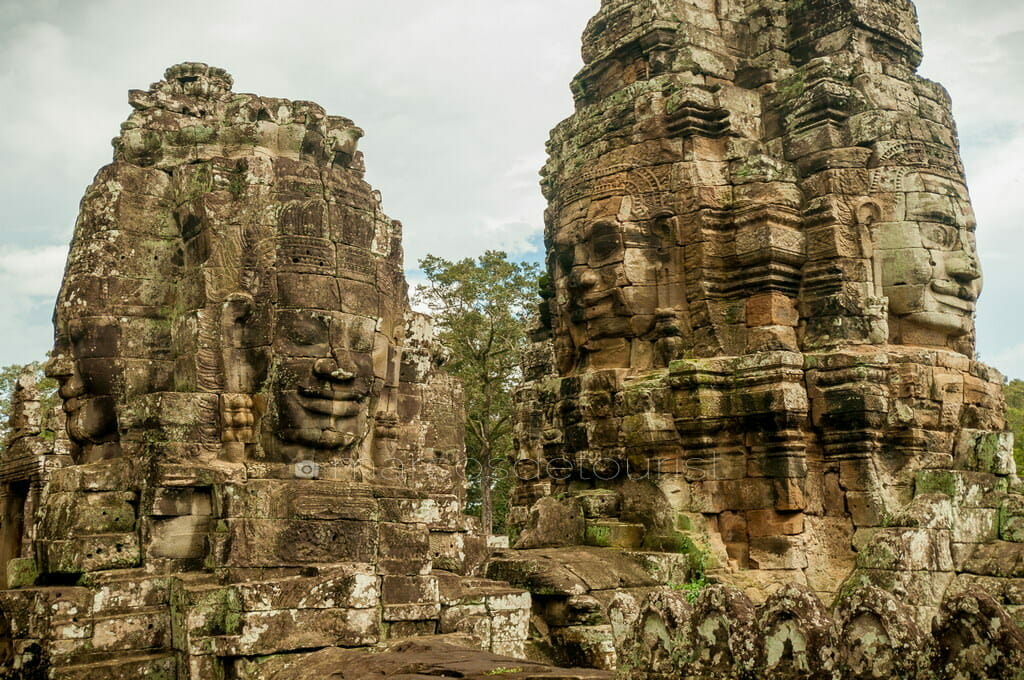 Bayon temple adorned with giant faces carved on its stone towers. Bayon stands at the center of the massive Angkor Thom, the city of temples. 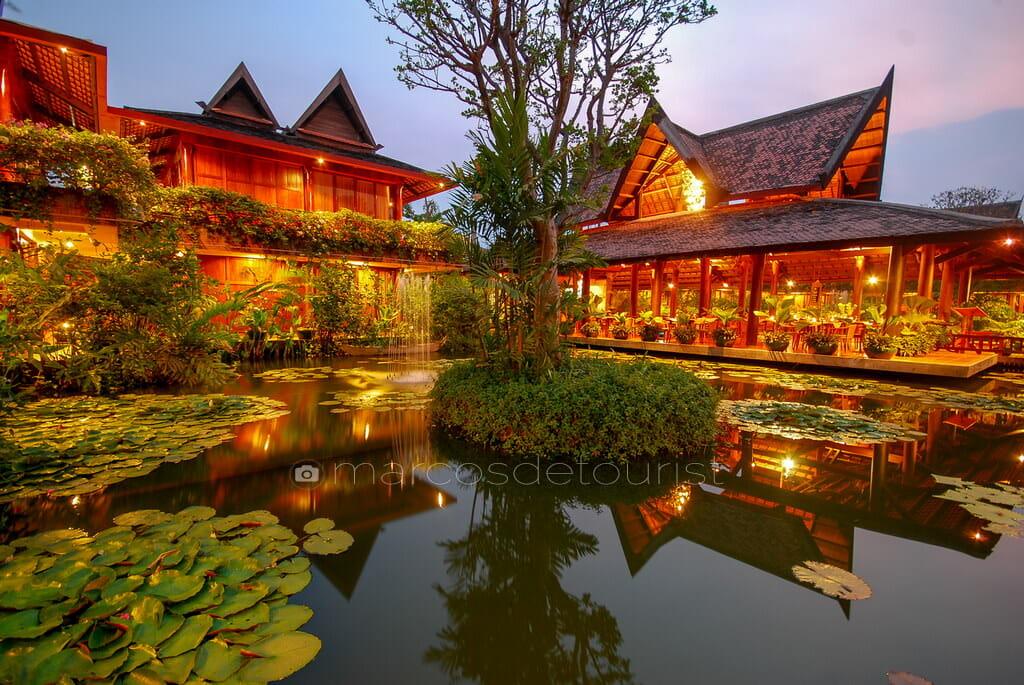 Sunset at Angkor Village Resort and Spa, a lavish resort in Siem Reap with beautiful Khmer-style buildings that appear to float on top of a gorgeous pond. 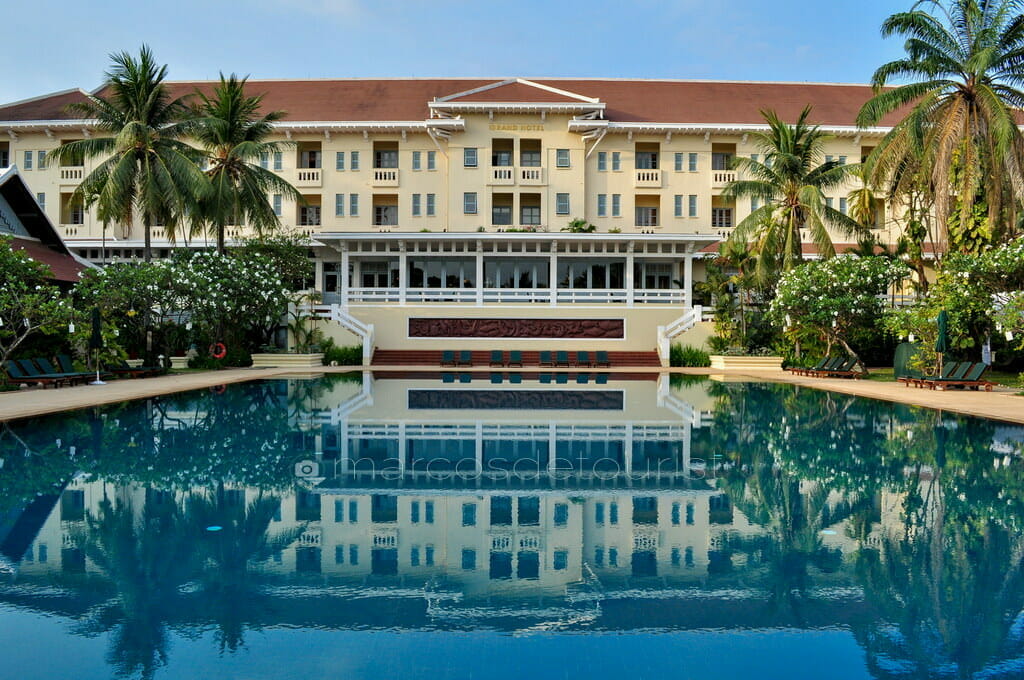 Poolside view of Raffles Grand Hotel d’Angkor, a historic resort in Siem Reap that captures the French-colonial spirit of the city. 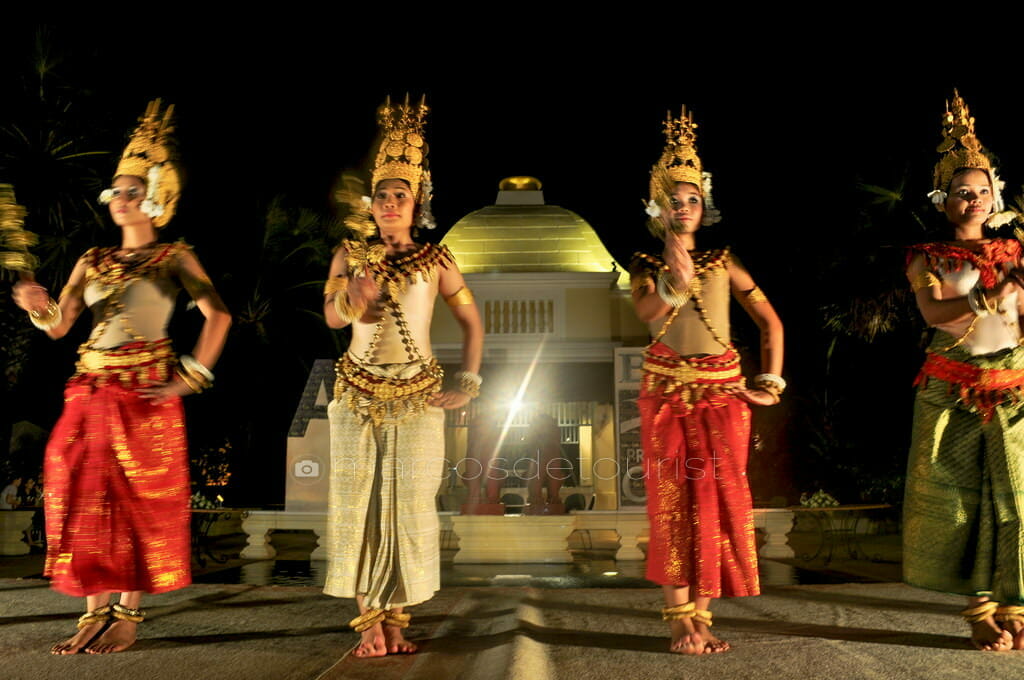 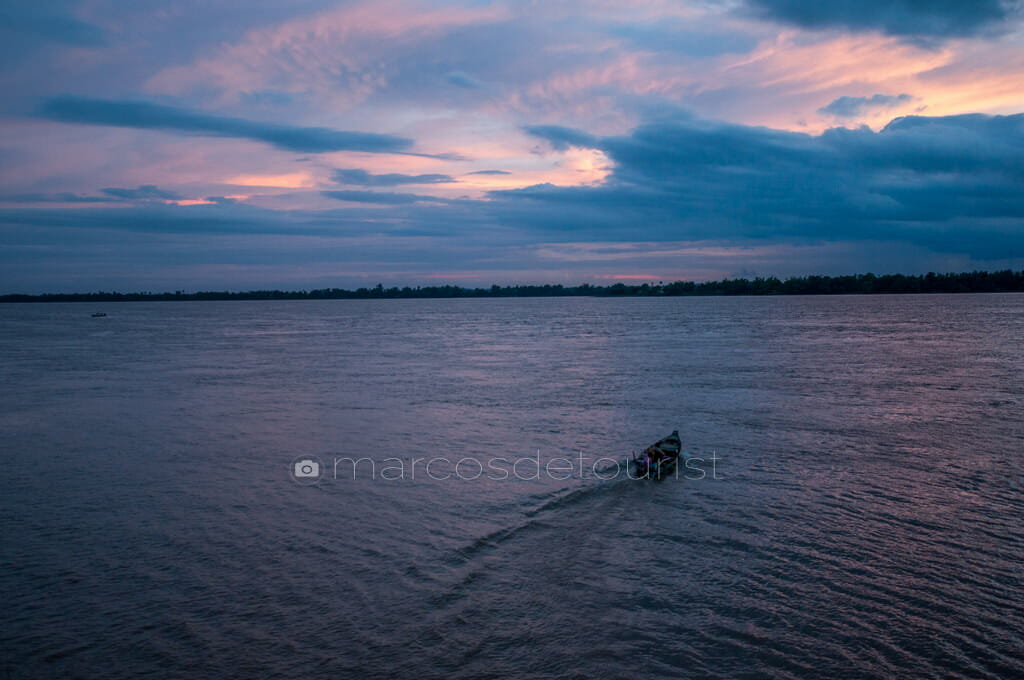 Small boat crossing the Mekong River… fading off into the beautiful sunset twilight. 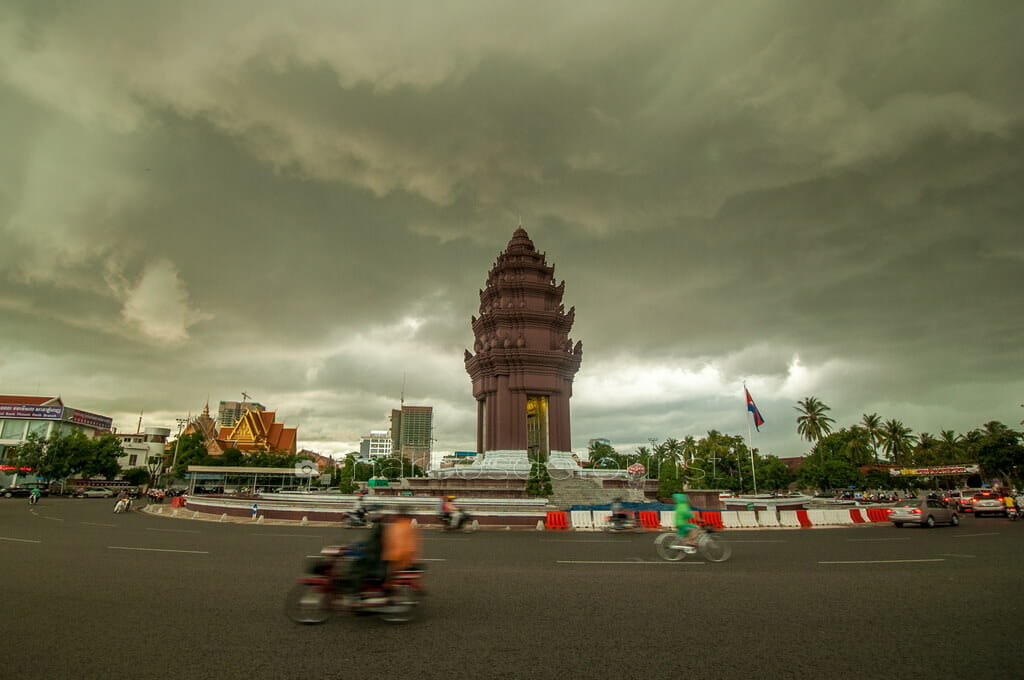 Cloudy skies hover over the Independence Monument at Phnom Penh, the capital city of Cambodia. 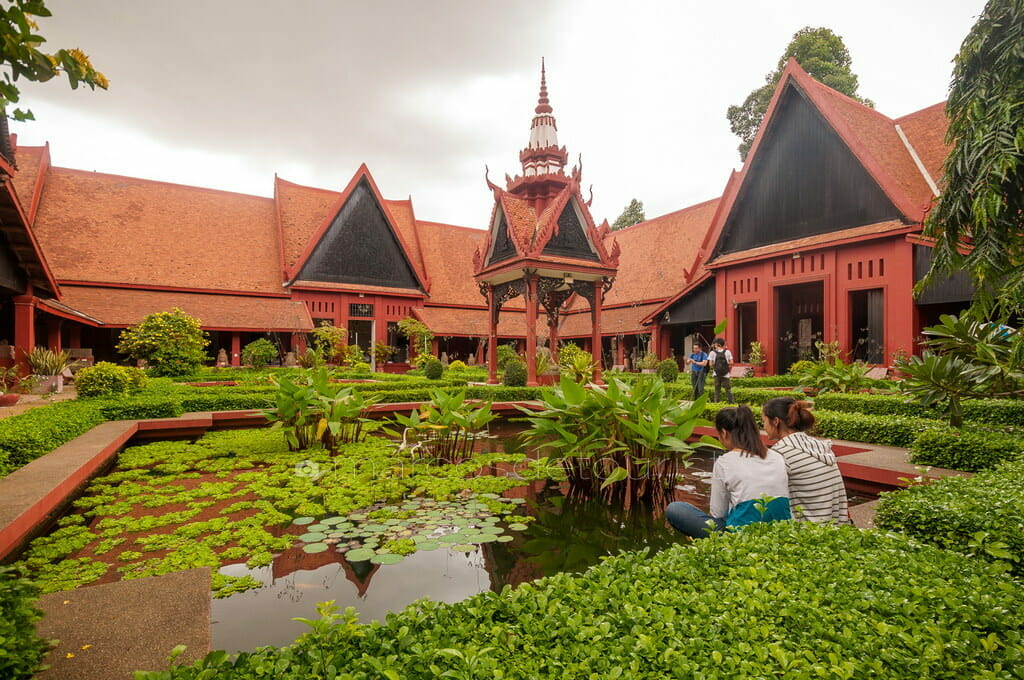 Refreshing garden inside the beautifully-built Cambodia National Museum in Phnom Penh. There were a lot of exquisite statues displayed at the museum galleries. 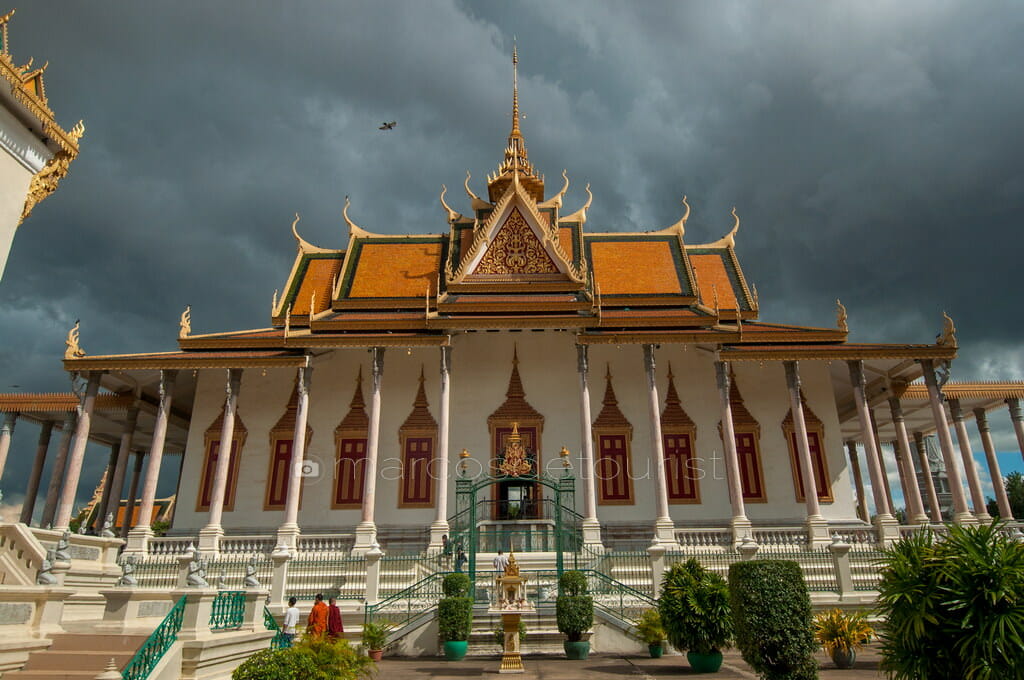 The Silver Pagoda at the Royal Palace in Phnom Penh under an ominous sky. The pagoda was named as such because of 5,329 handcrafted silver tiles that covered the floor. It housed a sitting Buddha image made of emerald and a 90kg standing Buddha made of gold. 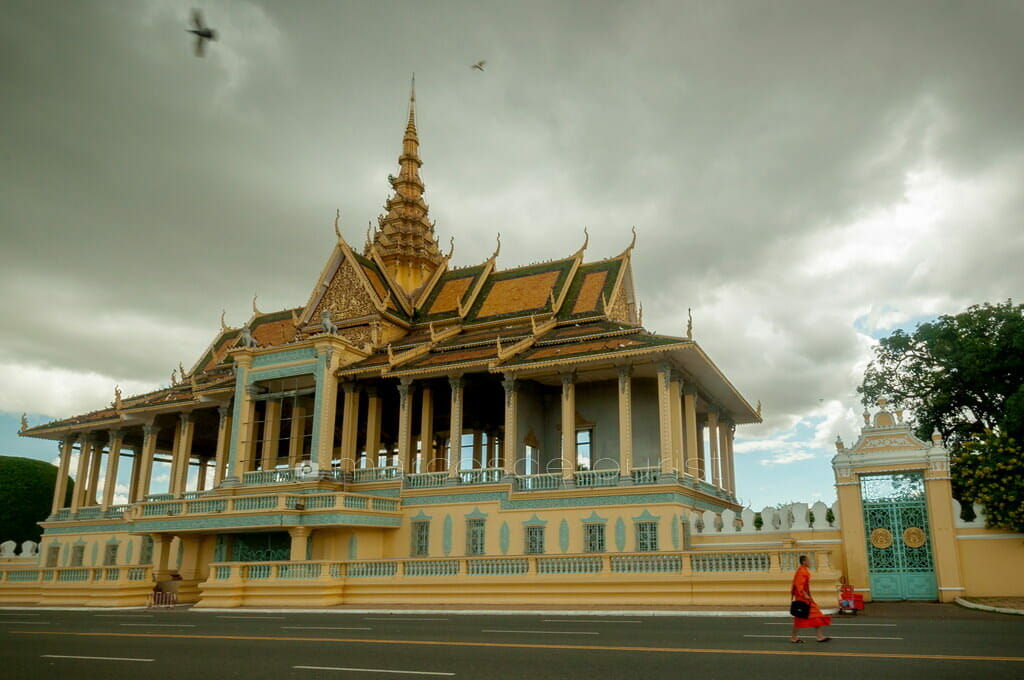 A Buddhist monk passes by the Chanchhaya Pavilion at the Royal Palace.

24. Swamplands at the Killing Fields 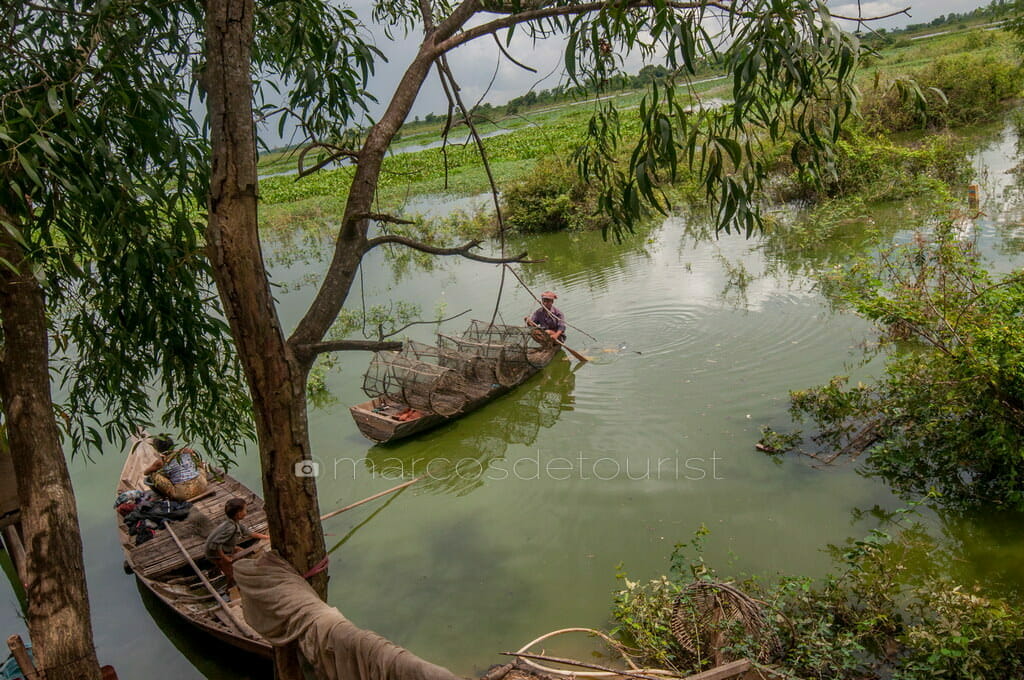 Swamplands at the Choeung Ek Genocidal Center, a mass grave where victims of the Cambodian genocide (orchestrated by the Khmer Rouge) were killed and buried. 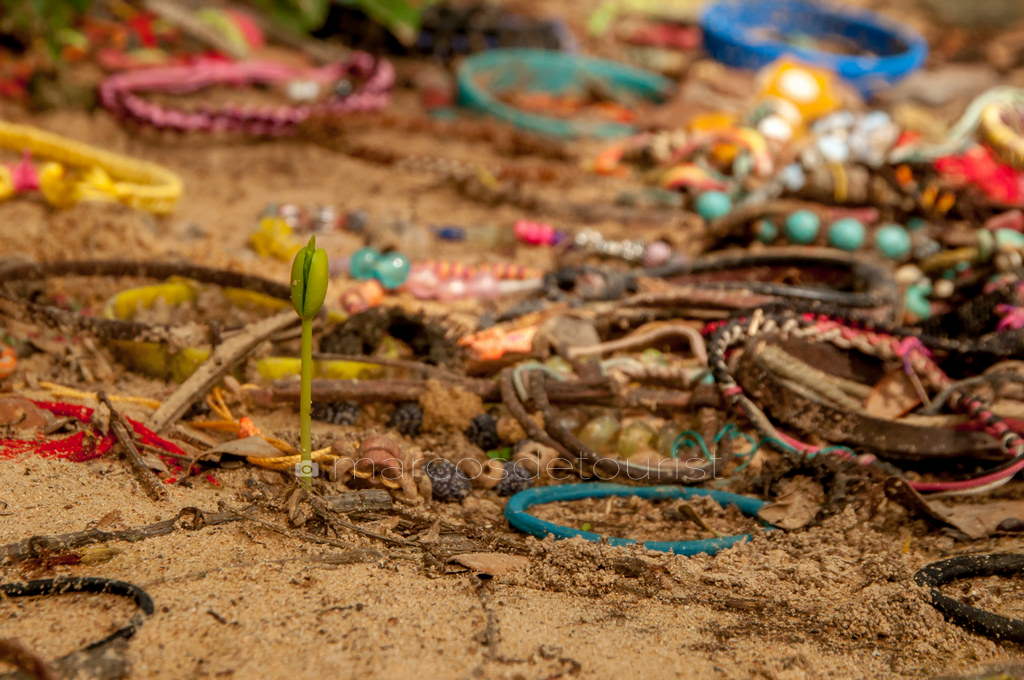 A sprout emerges from the ground covered with colorful bracelets that visitors leave at The Killing Fields to honor the victims of the Cambodian genocide.