Every time I visit Iloilo’s Gigantes group of islands, I keep discovering new things that remind me why it’s one of my favorite island destinations in the Philippines. This summer, Las Islas, a Roxas City-based travel company invited me to experience their newly launched Gigantes tour. I was very excited to go on an adventure to Gigantes again — my fourth visit since I first came to the islands in 2009.

Up until a few years ago, my blog posts and guides at Ambot-ah and ExploreIloilo were among the only handful of pages online about traveling to Gigantes. Now, you can find thousands sharing their wanderlust-inducing experiences on social media. My Facebook timeline had not been spared with a flooding of Gigantes photos since March! Safe to say, Gigantes isn’t one of Iloilo’s hidden gems anymore. Crowds of boat tours are commonplace during weekends and especially in the Summer months. One big reason why I wanted to go back was to see for myself how much Gigantes had changed and how its natural beauty coped up with the huge influx of tourists.

Our Journey to Gigantes

From our hotel in Roxas City, Las Islas’ private van took us to Bancal Port in Carles, where we started the sea voyage to Gigantes Islands. When traveling from Manila or Northern Panay, this is the fastest way to get there instead of transiting through Iloilo City and Estancia Port.

We felt like our Gigantes experience already started the moment we saw the boat that ferried us to and around the islands. It was an ingenious yacht/pumpboat hybrid large enough to provide a smooth sailing experience and carry 30 people. Hidden in the hull were two rooms, each filled with two sets of double-decker bunk beds. My favorite part of the boat were the nets attached on the outriggers. When the waves weren’t too rough, we could sit or even lie down on the net and enjoy the feeling of swiftly floating across the sea. 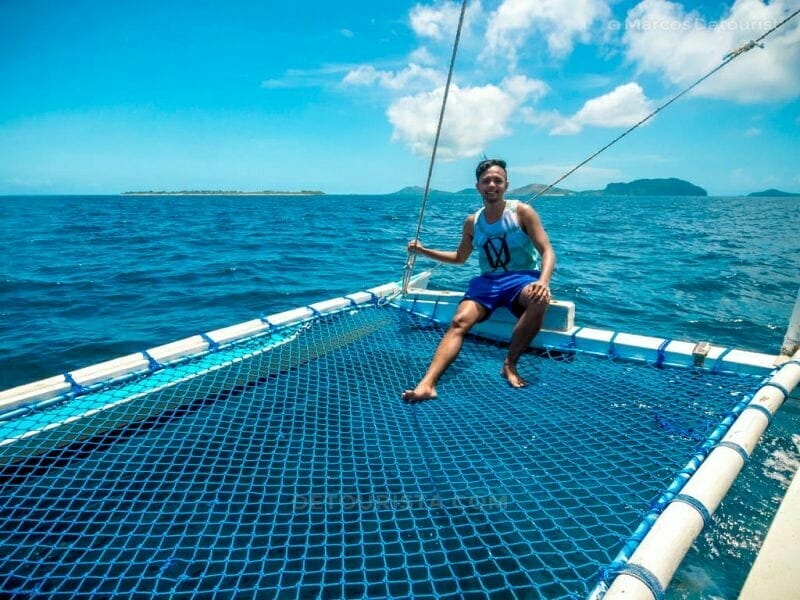 On our way to Gigantes Islands. 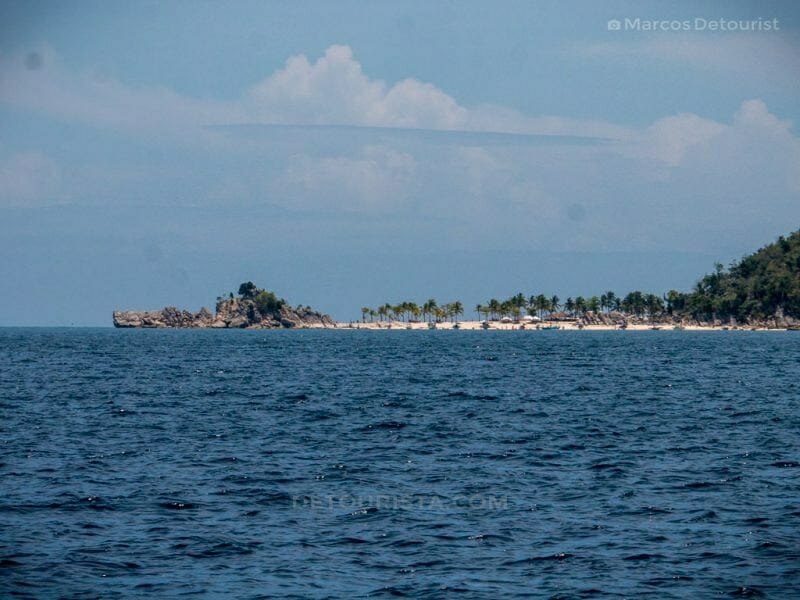 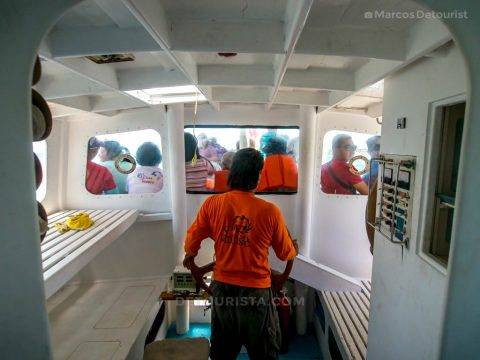 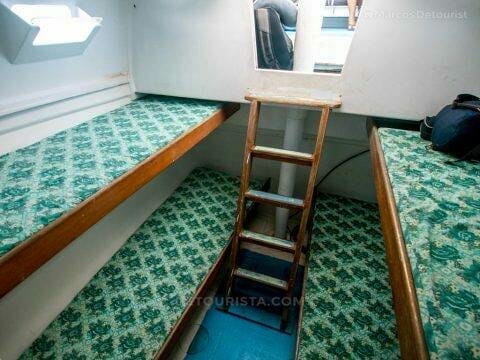 One of two rooms with beds to sleep in on Las Islas’ boat.

We stayed for two days and one night in Gigantes and had the beautiful experience of spending the night at Cabugao Gamay Island. It gave us the unique opportunity to witness both the sunrise and sunset views from the island and enjoy its famous viewpoint without the crowds in the early morning and late afternoon hours. It was also a very convenient base for our island hopping tour since this area is where many of the main tourist spots in Gigantes could be found. Though, we wouldn’t have minded if we had ventured farther because it meant more time to enjoy cruising on the “yacht.” 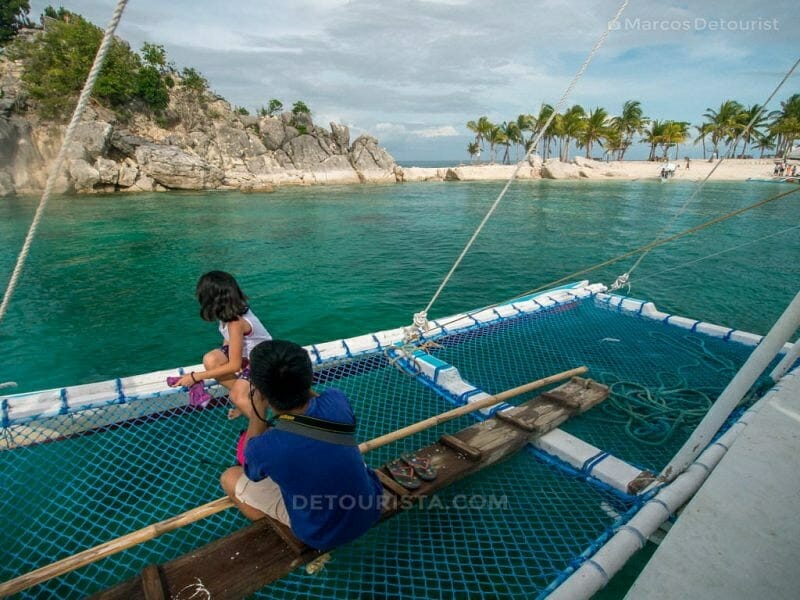 Antonia Beach – The poster at the tourism office erroneously referred to Antonia as an island but it’s actually a beach situated in the south side of Gigantes Sur Island. The scene now is far from the blissful image of calm emerald waters and an empty beach I had seen years ago. We came at noontime and it was full of tour groups having their picnic lunch and boats docked at the beach. I’ve, so far, visited Antonia twice under the same circumstances, and it made the appearance of the beach go from spectacular to average, quite honestly. However, it is still interesting to visit because of its special beach that has two shorelines and an overlooking vantage point from the stack of rocks at the far end. They also served us two buckets full of delicious assorted seashells. It was my first time to try the “Wasay-wasay” shell and I loved it! I’ve only seen this kind of shell in Gigantes. 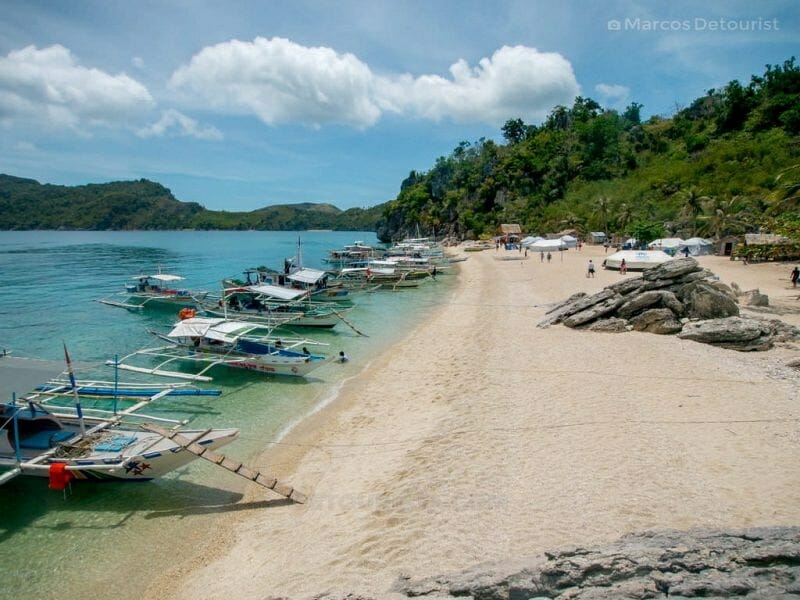 The calm side of Antonia Beach full of docked pumpboats. 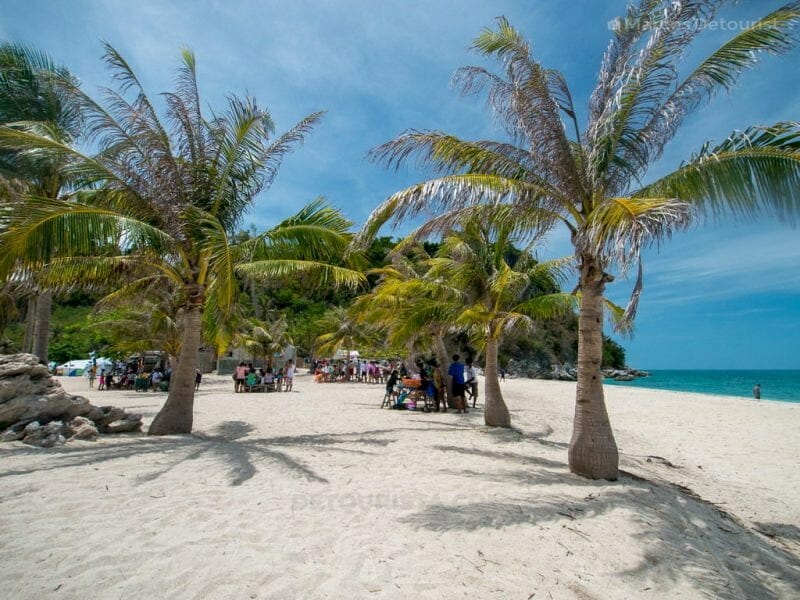 Tourist having picnic lunch under the shade of coconut trees. 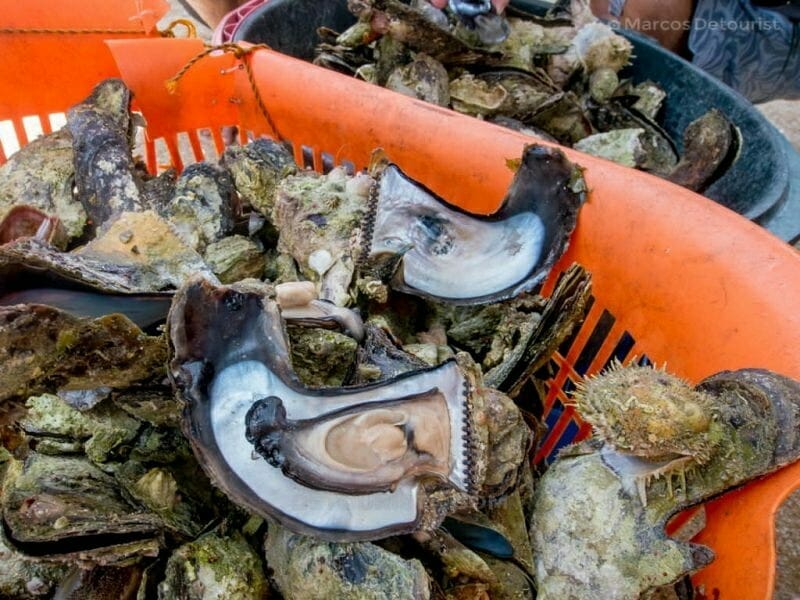 Steamed Wasay-wasay and other assorted seashells served in Antonia Beach.

Bantigue Island – This island has a long snake-like sandbar that is only visible during low tide. We visited Bantigue twice on this trip alone because the tide was too high on our first try. What a difference the tide level makes! The water was a lot more clear and inviting. During low tide, you can easily walk from the far end of the sandbar to the small village, where you can buy steamed scallops for only P1 (One Peso!) per piece. 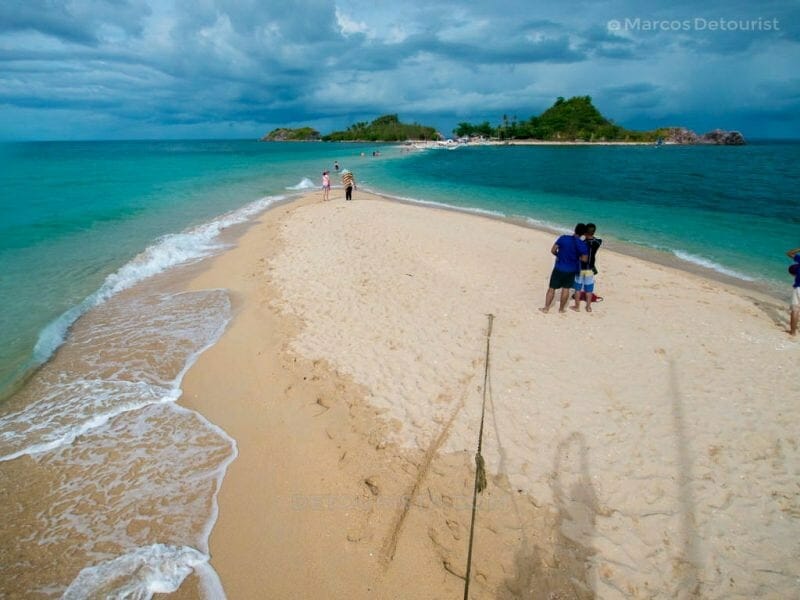 The long sandbar at Bantigue Island. Half of it was hidden by the tide on our first visit. 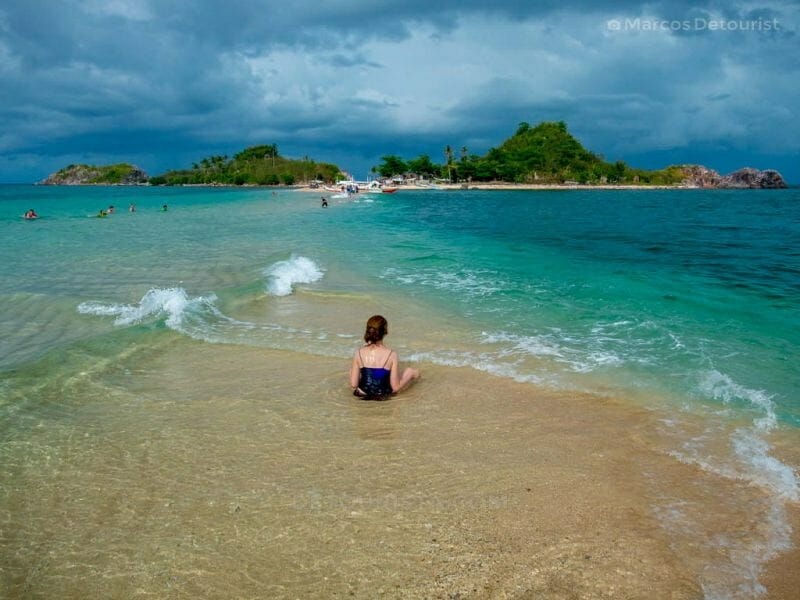 The beautiful end of the sandbar where two currents collided. 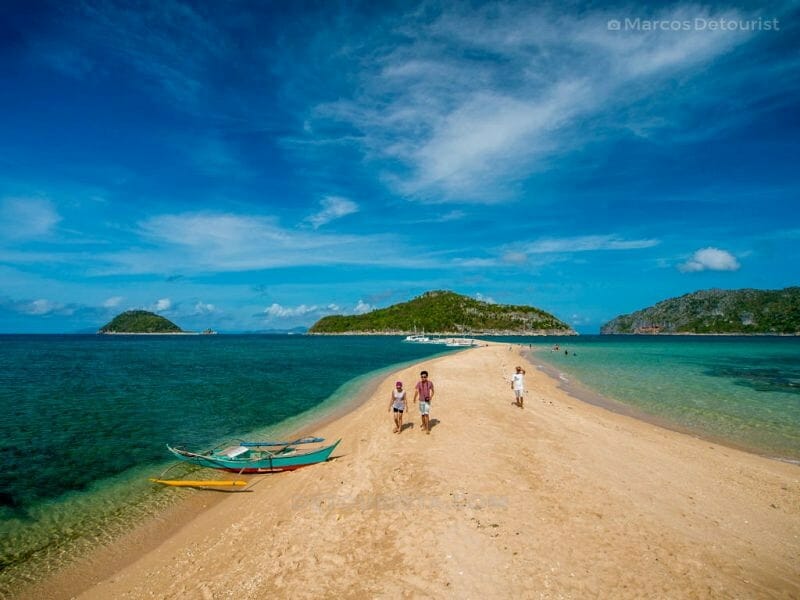 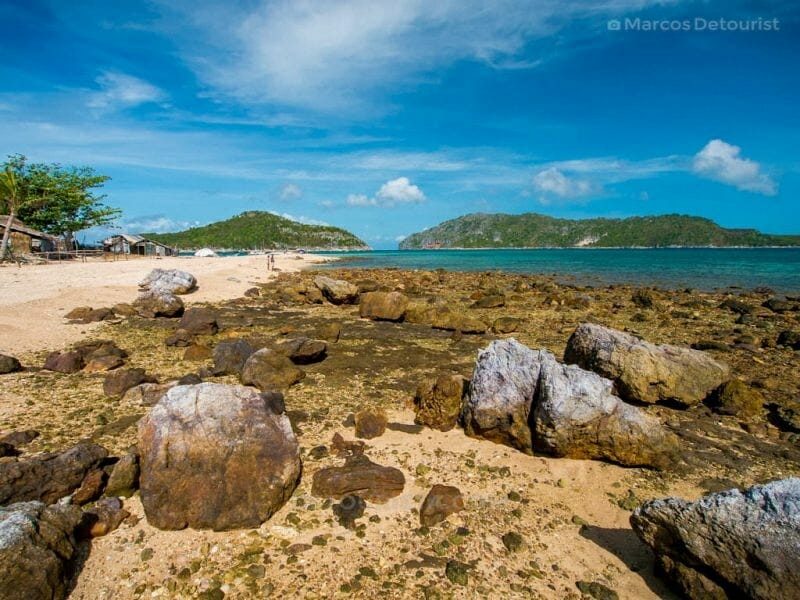 The rocky shore of Bantigue Island. 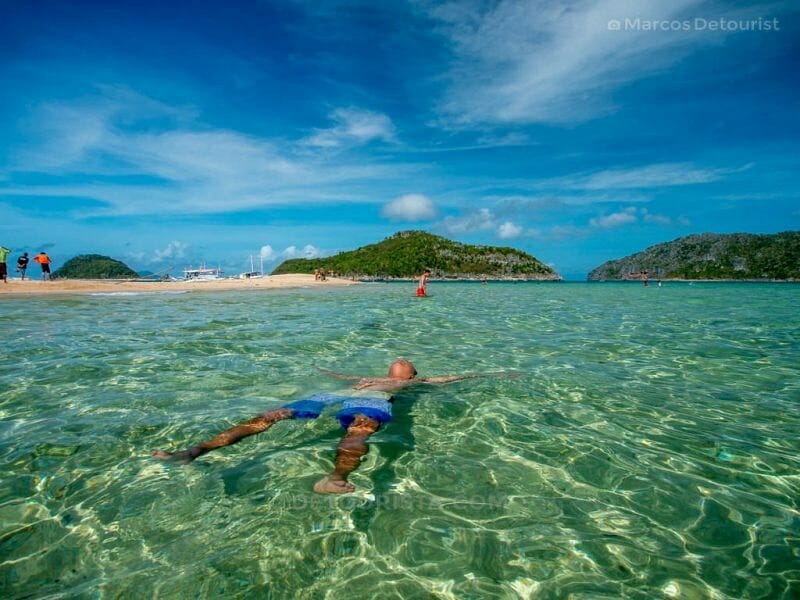 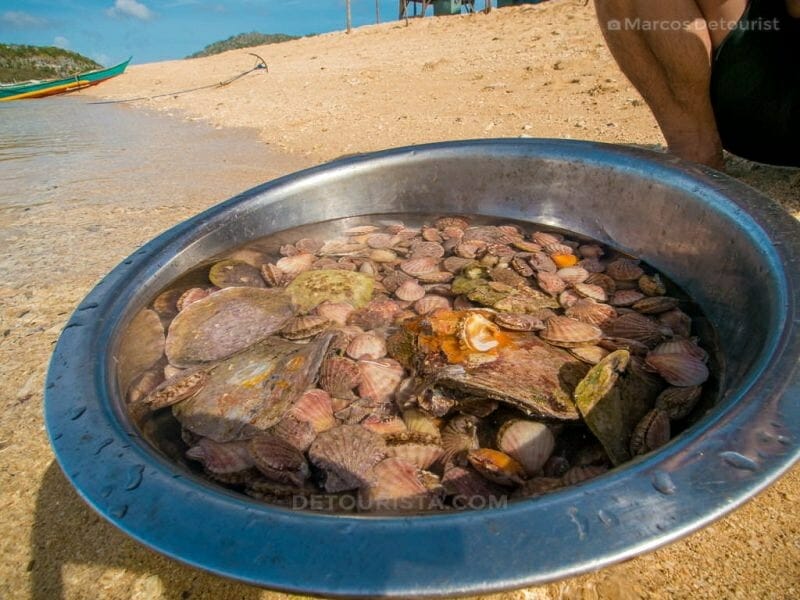 Seashells for sale at the village in Bantigue.

Tangke – Gigantes Sur’s famous salt water lagoon hidden behind jagged rock cliffs. According to local lore, it served as the bath tub of giants that used to inhabit Gigantes. Took us quite a while to get to it due to the limited docking space. It was low tide during our visit. It wasn’t the best time to see Tangke because of the murky quality of the water. The best time to visit is during high tide when you can fully enjoy the crystal clear view of the water. On the other hand, the tide was low enough that I could easily wade my way to the far end of Tangke for a different view of the lagoon… but not too low for cliff jumping. There was a good ( 5-6 meter high ) spot beside the docking area that was perfect for it. 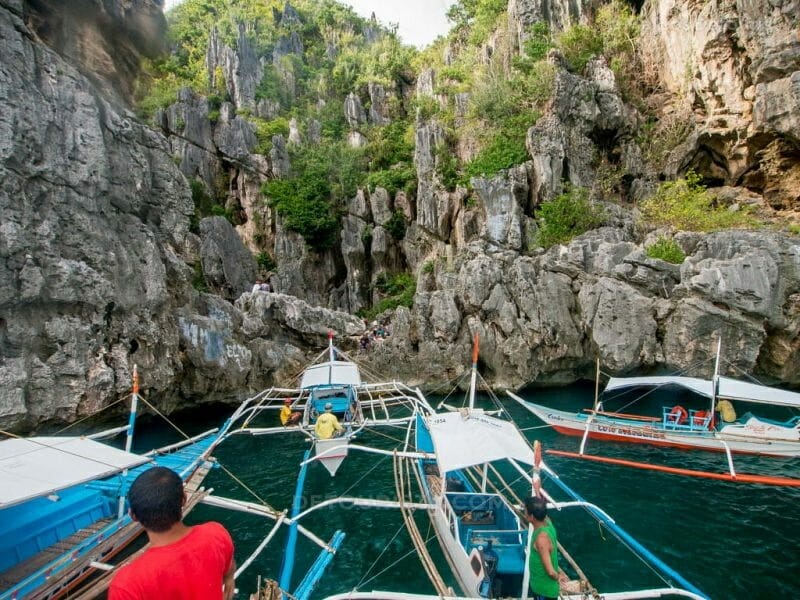 While waiting to dock at Gigantes’ Tangke. 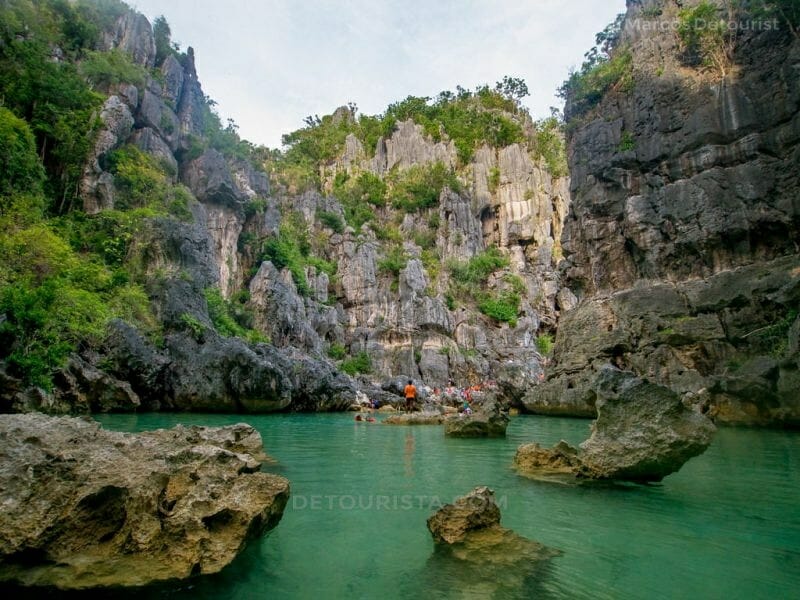 View from the far end of Tangke. 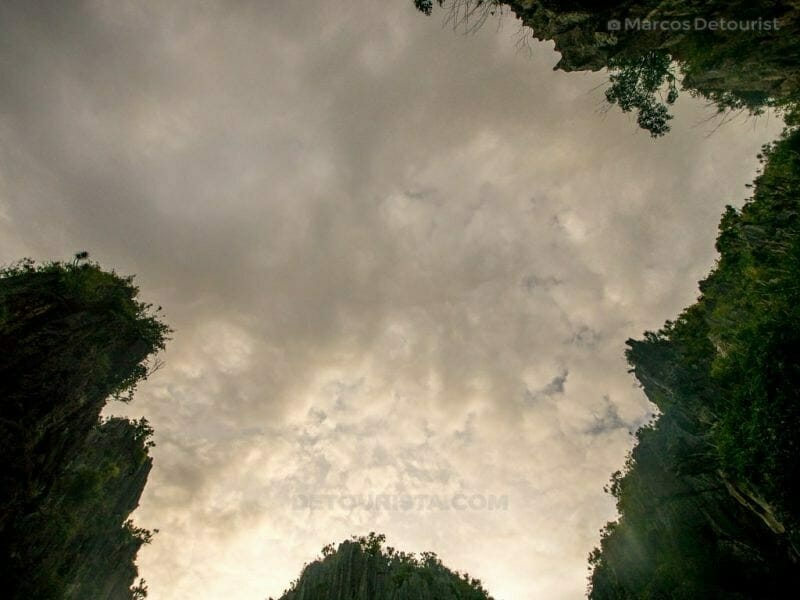 The “star” formed by steep limestone karst formations when looking up from the lagoon. 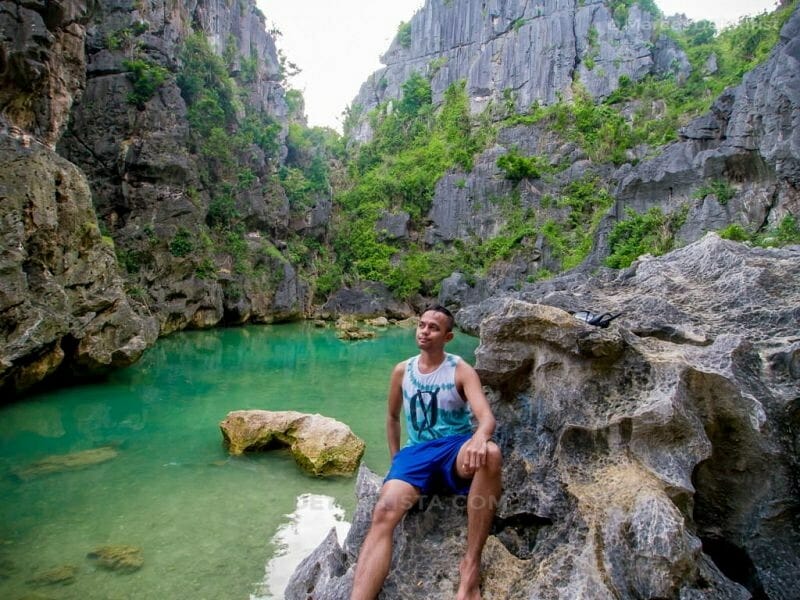 A serene view of crowdless Tangke just before we left.

Maruja Flora’s Island Paradise – Since we stayed at Cabugay Gamay Island, it wasn’t part of our island hopping tour anymore :) There’s a budget resort operating in the island now called Maruja Flora’s Island Paradise. They offer basic accommodations, so don’t expect any modern luxuries… only the luxury of communing with the nature’s beauty. You can choose to stay in a tent or in their sole cottage if it’s not taken yet. They also serve meals, so you don’t have to buy food before leaving the mainland. 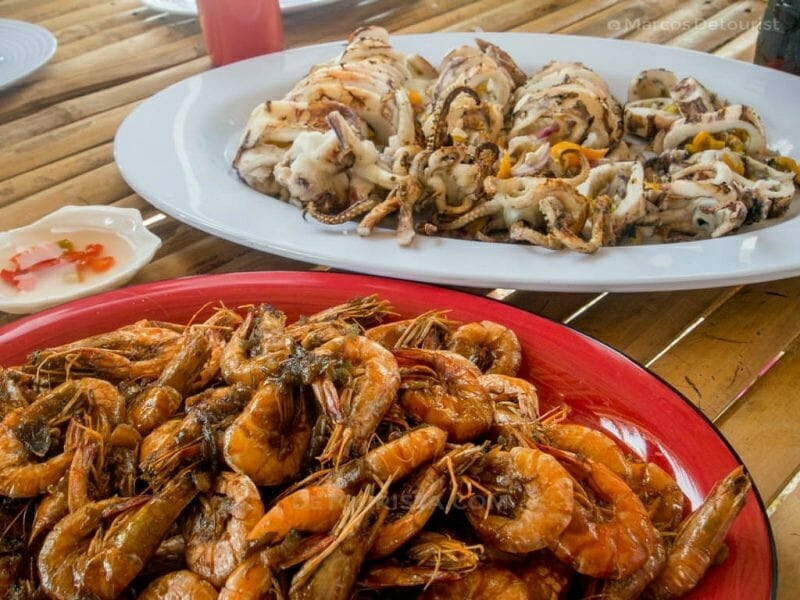 Cabugao Gamay Viewpoint – This is the view you can expect from the top of the viewing deck if you go during the peak during hours on a weekend: 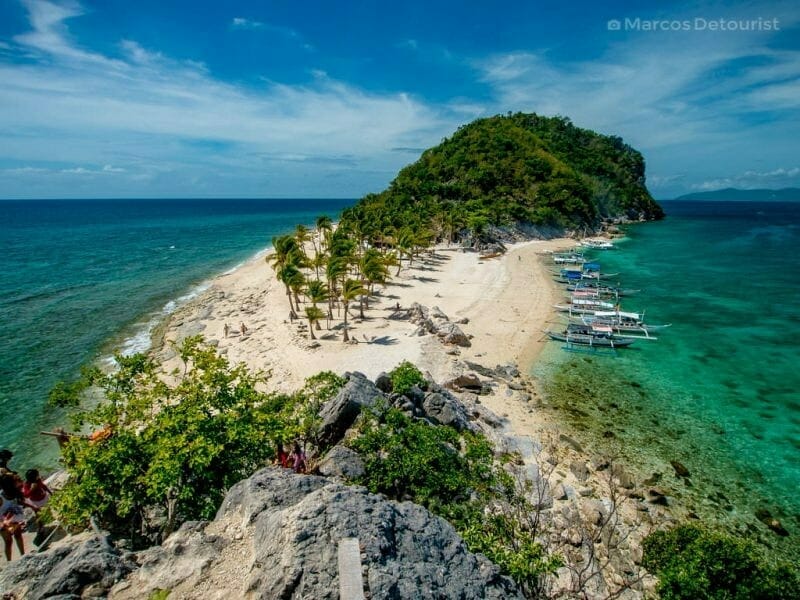 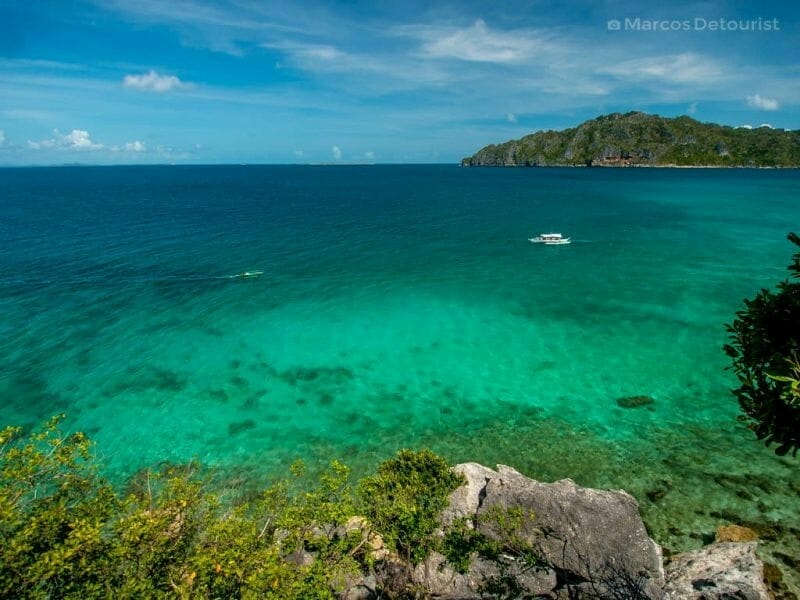 Sunset at Cabugao Gamay – This is the beautiful sunset view we experienced: 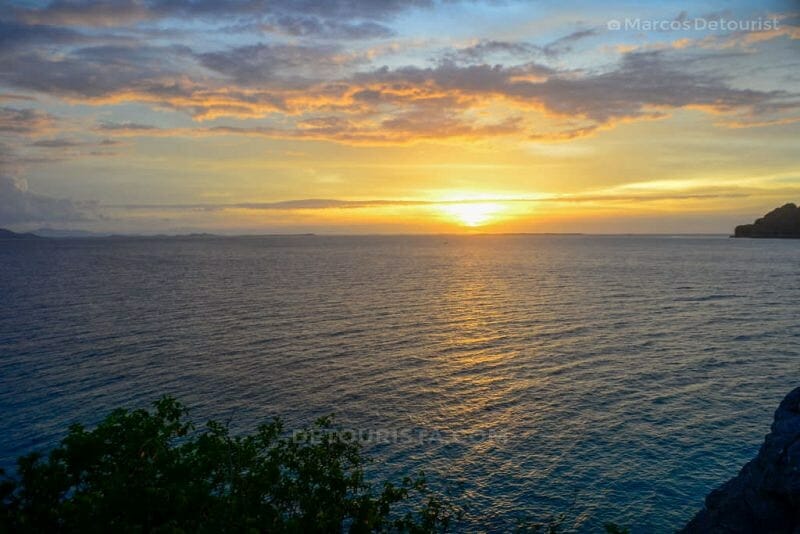 Sunset view from the viewing deck at Cabugao Gamay Island, 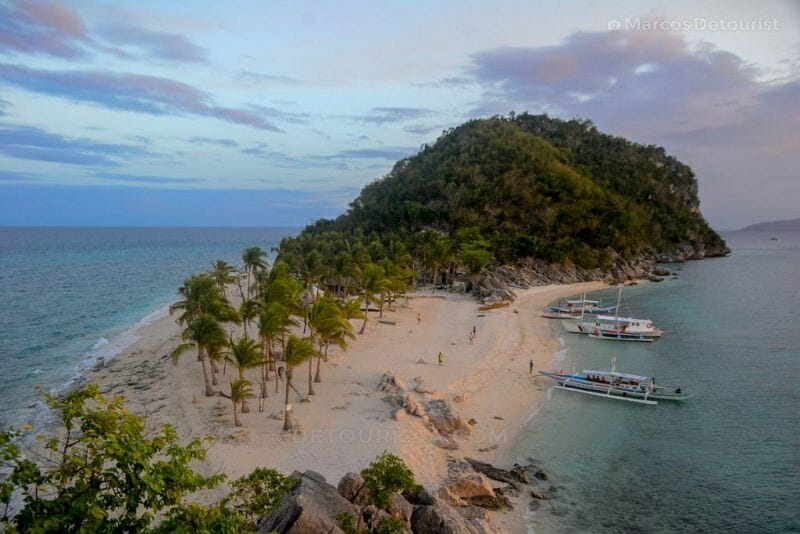 Sunrise at Cabugao Gamay – If you wake up early enough, the sunrise view is also worth the effort! 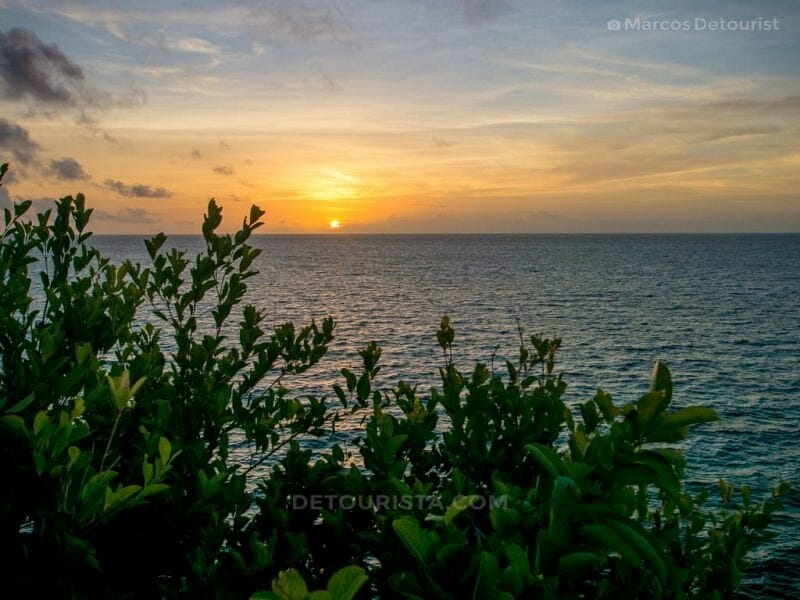 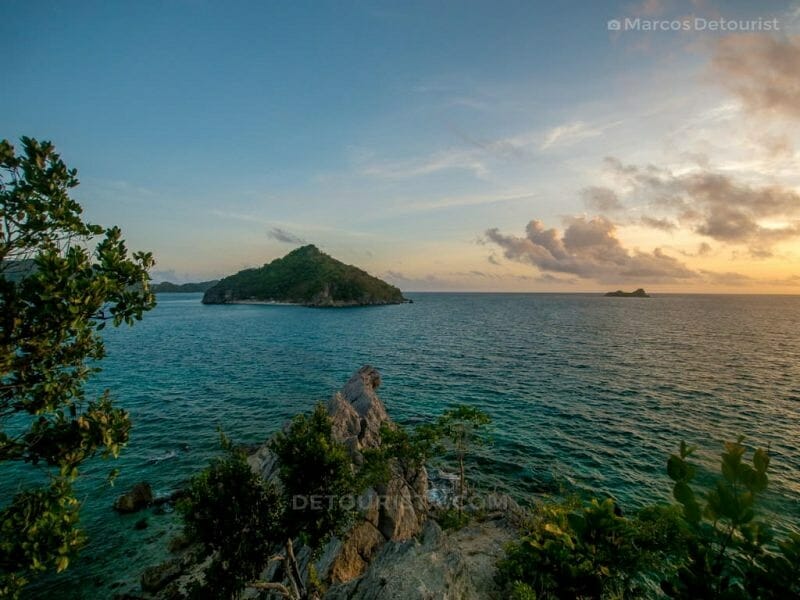 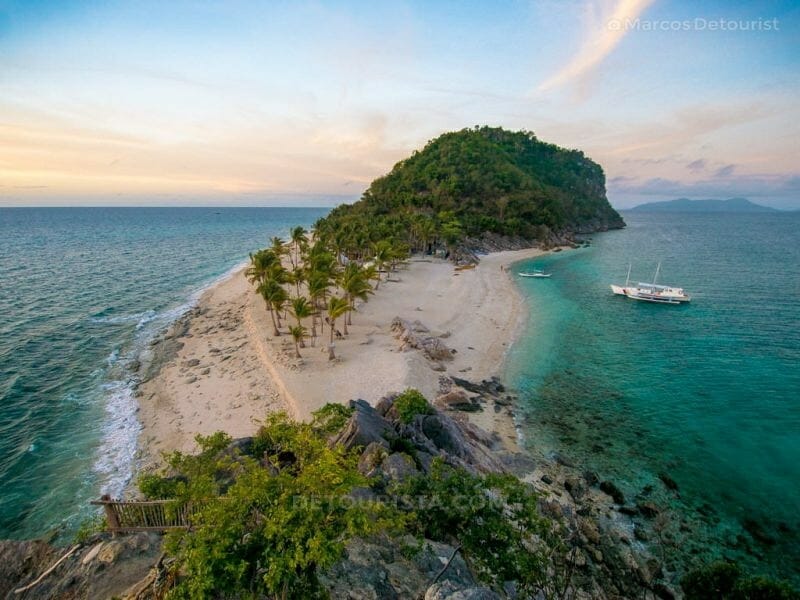 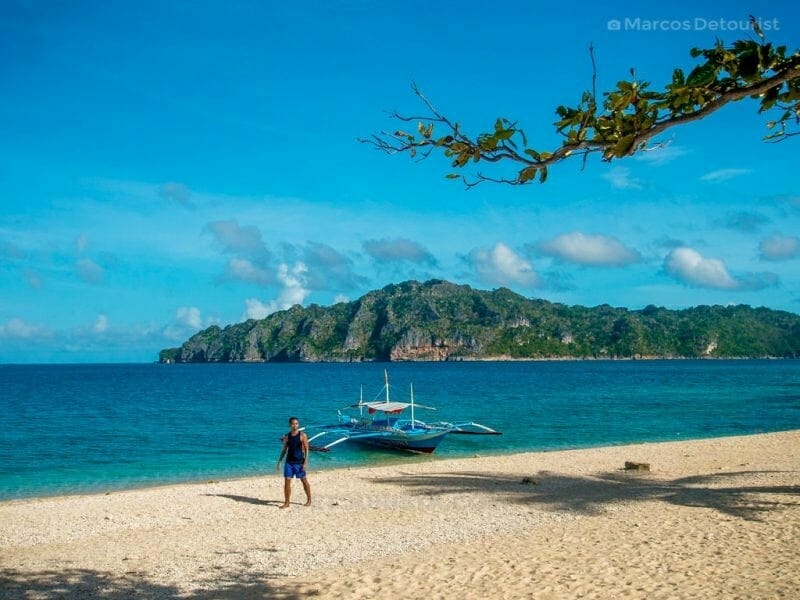 Me at Cabugao Gamay taken early in the Morning before the tourist boats came.

Overlooking view from the Marcos trail – While waiting for our departure from Cabugao Gamay, I could not resist exploring the island’s forested hill. I actually reached the topmost part but the canopy of trees blocked the view. Fortunately, I discovered a clearing, which can be reached after an easy 3-minute hike from the beach. It’s a nice alternative if the popular viewpoint feels too touristy. If you want to see it for yourself, just ask Las Islas about the “Marcos trail.” :) 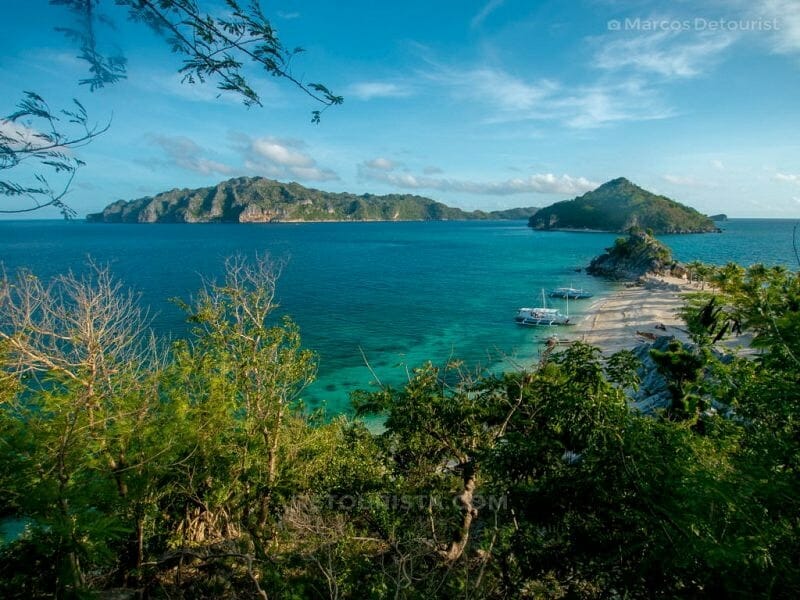 View from the Marcos trail in Cabugao Gamay Island.

About Las Islas Travel and Tours

Las Islas Travel and Tours is a travel agency and tour operator based in Roxas City, Capiz. They aim to promote and bring to the forefront of the Philippine tourism industry the underrated, less visited, and rarely explored islands in the Philippines.

More than just a travel agency and tour operator, Las Islas Travel and Tours aspires to create a community of responsible travelers by educating clients about proper garbage disposal, waste segregation, environmental conservation and preservation, and the protection of our seas, marine life, and aquatic biodiversity while at the same time helping clients enjoy a destination’s majestic attractions both man-made and natural.

How to Book Your Tour to Gigantes

You may book your own adventure with Las Island Travel and Tours through these channels. Don’t forget to mention “Detourista” when sending your inquiry or reservations:

Watch out for my next blog post featuring my tour of Roxas City and Capiz with Las Islas.