When people ask me what about my favorite countries to travel in Asia, Laos always comes to mind. I admit, it’s not the first country that I would name but I just can’t help getting hungover whenever I think about my beautiful adventures in Laos. Many of you might be asking these two questions: Where in the world is Laos? and why did I want to travel there?

Laos is located in the mainland part of Southeast Asia. It is sandwiched between Thailand, Cambodia, Vietnam, and China — four highly popular travel destinations. There are a lot of people who visit Laos too but more people skip it because it’s “out of the way” from the usual Indochina tourist trails. Since there aren’t a lot of destinations and big airlines with direct flight to Laos’ major cities, most tourists end up traveling to Laos by land. From Thailand, Vietnam, or Cambodia, the bus rides getting there alone may eat up a whole day or even two depending on which part of the country you’re planning to visit.

In 2012, I spent three months traveling around mainland Southeast Asia and ended up exploring the entire length of Laos for 18 days from its northern to southern borders. Laos had been in my bucketlist for quite some time. One of the big reasons why was to capture that iconic image of Laos with towering limestone mountains surrounded by golden rice paddies. That magical moment did happen in a place that I least expected (as seen in the first photo below) as well as many other memorable experiences throughout my journey.

If you’re traveling to Asia anytime soon and you’re looking for cool places to visit, here are 32 photos that may convince you to take that long bus ride to Laos:

1. Basking under tranquil of rice fields and monolithic forest-covered karst rock formations in Vang Vieng, Laos. I was so close to skipping Vang Vieng knowing that it was a big party town. I’m go glad I didn’t and got to enjoy this breathtaking view.

2. My rented bicycle parked along a dirt road that crossed through rice fields and awesome view of Vang Vieng. This was how I got around town to explore and take pictures.

3. A view of Vang Vieng from the bridge over the Nam Song River. The breathtaking view of steep karst formations surrounded much of the town. 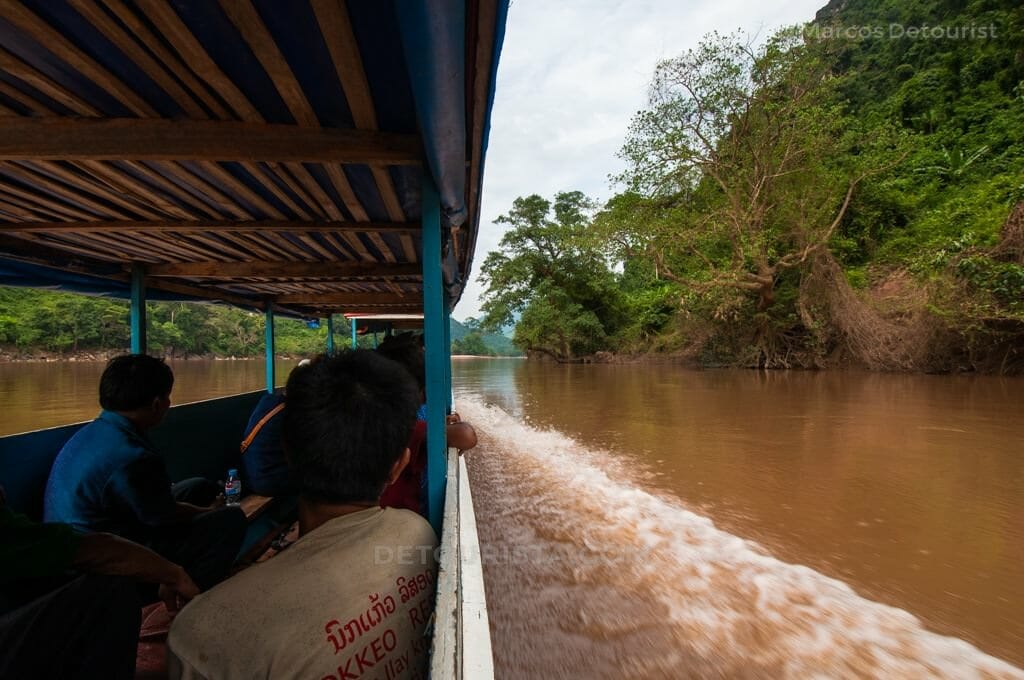 4. On a local ferry from Nong Khiaw to Muang Ngoi Neua, a remote farming village in Northern Laos.

5. There were no roads that led to Muang Ngoi Neua. The only way to get there was through a ferry ride that had amazing riverside views.

7. Overlooking view of Muang Ngoi Neua from the trail to Phanoi Cave.

8. Along the foot trail that connected Muang Ngoi Neua to other small villages.

9. View from one of the inner village trails at Muang Ngoi Neua, Laos

11. Breathtaking view of steep cliffs at Nong Khiaw. See how tiny the ferry was in comparison.

16. The roof of Haw Pha Bang Temple at the Royal Palace in Luang Prabang. The elaborte roof was one of the things that made the Buddhist temples in Laos distinct from others in Asia.

19. Monks watching a local rowing team at Luang Prabang, Laos. The monk’s morning alms giving was a popular (touristy) sight in Luang Prabang. Unfortunately, I never woke up early enough to see it.

22. That Luang, a national landmark of Laos in Vientiane.

24. Sunset at the riverside park in Vientiane, Laos. Vientiane may well be the most laid-back capital city in all of Southeast Asia.

29. Inside one of the Buddhist shrines at Vat Phu in Champasak, Laos.

30. Tad Yuang Waterfall at the Bolaven Plateau in Champasak, Laos.

31. Footpath leading down to the base of Tad Yuang Waterfall.

32. Tat Fane “twin” Waterfall, one of the tallest in Laos.