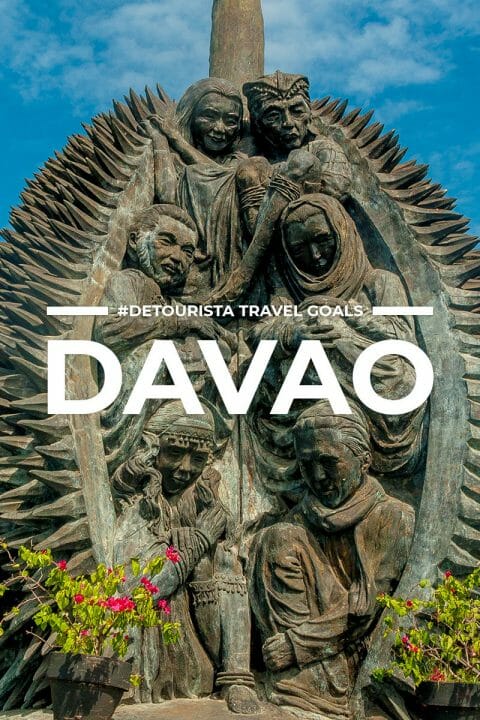 Davao City is the largest urban center in Southern Philippines, and the third largest metropolitan area in the Philippines after Manila and Cebu.

Davao is famous for its natural attractions, many of which are easily reached from the city center. Within an hour’s travel from the airport or Davao City hotels, you can already enjoy the pristine white sand beaches of Samal Island or visit the highland nature parks at the foot of Mount Apo, the Philippines’ tallest peak.

A trip to Davao isn’t complete without a taste of the iconic Durian fruit and meeting the gigantic Philippine Eagle, the national bird of the country.

Davao City is also the gateway to surrounding provinces in Davao Region as well as nearby regions in the southern & eastern part of Mindanao.

Mindanao’s rainforests are home to the great Philippine Eagle, the country’s national bird and one of the largest eagles in the World. Visit the Philippine Eagle Center and meet the critically endangered Philippine Eagle. Here, the eagles are bred for eventual release into the wild. Resembling a typical rain forest, it’s a great place to get a feel of nature. There’s a number of other birds, mammals and reptiles as well, most of which are endemic to the country and some are considered rare.

Explore a pine forest, breathe the cool mountain air, and enjoy the breathtaking viewpoints. Eden Nature Park is a relaxing highland area that you can easily visit from the city center. This park resort offers homey accommodations, various restaurants that use ingredients food freshly harvested from gardens in the area, fun outdoor activities, hiking trails, and a cultural village.

Looking for a beach near Davao City? Samal Island is the go-to destination for locals and visitors alike. Samal, officially the Island Garden City of Samal (IGaCOS) is part of Metro Davao and Davao del Norte Province. Easily reached from the city, it is known for its many white-sand beaches, beautiful resorts, island hopping tours, and inland attractions.

Samal Island is home to one of the most famous luxury resorts in the Philippines ⁠— The Pearl Farm Beach Resort, a former pearl farm made iconic by its stilt-house inspired villas. You can also find more beach resorts dotted around the island…. from accommodations offering peaceful retreats to resorts featuring fun water sports and activities.

Go on a tour of Samal’s beautiful white-sand beaches and underwater sights. There are many places to go in the main island of Samal, remote Talicud Island and off-short islets.

Coral GardenLocation: Save on Google Maps.

Angel’s CoveLocation: Save on Google Maps.

Wishing IslandLocation: Save on Google Maps.

This is one of the most unusual sights in the Philippines! The Monfort Bat Colony is a must-visit when in Samal. Here, you can see small caves filled with millions of Geoffroy’s Rousettes fruit bats, which call the sanctuary home. The caves are so tightly covered with these bats that the cave walls look like one dark living mass.

The Davao Crocodile Park is one of Davao’s top tourist spots. Thousands of cultured crocodiles can be found here including Pangil, one of the largest captive crocodiles in the Philippines. If you’re fascinated with these giant reptiles, this is the place to go. Nearby, you can also visit the Tribu K Mindanawan Cultural Village and Davao Butterfly House.

The oldest church in Davao City. The Davao Cathedral, also known as San Pedro Cathedral, is a historical landmark, recognized as a National Cultural Treasure. One of the first things you’ll notice is its distinct curved roof said resembling a vinta (traditional sailboat)

Other places of interest in San Pedro Street area

Osmeña ParkLocation: Save on Google Maps.

Rizal ParkLocation: Save on Google Maps.

Quezon ParkLocation: Save on Google Maps.

Commemorative Monument of Peace and Unity / Davao City CouncilLocation: Save on Google Maps.

Make your way up the mountain and get a panoramic view of Davao City while enjoying a sumptuous dinner at Jack’s Ridge. Taklobo restaurant offers open-air dining and Filipino comfort food while Karlo’s Gourmet serves coffee and pastries.

“Tastes like heaven but smells like hell”, Durian is considered as the symbol of the city. There’s no better place to try the exotic Durian than at the fruit markets in Davao. Head to the street-side fruit stalls fronting Magsaysay Park and have the sellers crack open a fruit. After you get used to the strong signature odor, take a pinch of the golden pulp and savor the creamy goodness. Bangkerohan Market is also a great place to go for a more local market feel.

Where to buy durian and fruits in Davao City

Davao’s Chinatown is the largest in the Philippines by land area and the only one in Mindanao. It is the primary residential area of the Filipino-Chinese community in the city. There are four Chinese-style archways in Davao Chinatown. A large arch is located across the street from Magsaysay Park). Within the area, you can go the temples including the Long Hua Buddhist Temple, Polian Temple and Mindanao Taoist Temple.

After a visit to the Philippine Eagle Center, drop by Malagos Garden Resort. This 12-hectare nature park is a popular tourist spot for its butterfly sanctuary, waling-waling orchid forest, a bird feeding dome, and the Chocolate Museum.

Davao is not spared from the mall-craze in the Philippines. Huge shopping malls can be found all over the city offering cool comforts, great shopping, food courts, and a wide selection of restaurants.

Other places of interest in Davao City

Shrine of the Holy Infant Jesus of PragueLocation: Shrine Hill, Talomo. Save on Google Maps.

Davao Museum of History and EthnographyLocation: Insular Village, Lanang. Save on Google Maps.

Located 2 to 3 hours away from Davao by land, General Santos City is the “Tuna Capital of the Philippines” and the gateway to the Soccsksargen Region, which occupies the South Central part of Mindanao Island.

11 Places To Visit in General Santos

12 Places To Visit in Lake Sebu

Go on an adventure to remote Balut Island in Davao Occidental Province. Go on a trek to the forest-topped summit of Balut Volcano, see the Sabang Hot Spring and go on an island hopping tour to see the pink sand beach in Olanivan Island.

Places to visit in Davao

Davao tourist spots, things to do in Davao, where to go in Davao & more.

Other places of interest in Davao City

What places have you added to your bucketlist? Have you been to beautiful places in Davao that should be on this list? Feel free to share your thoughts in the comments!

Where to Stay in Davao

Where to Stay in Samal

15 Places To Visit in The Philippines 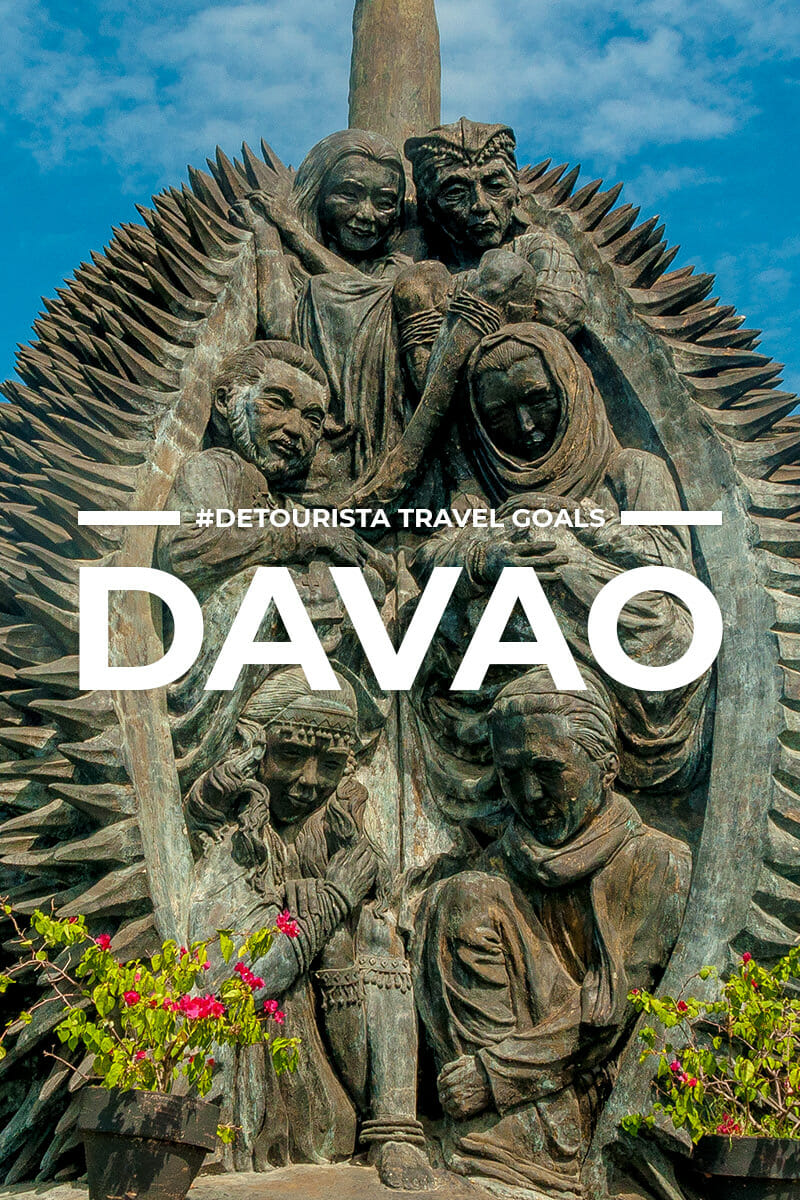 19 Places to Visit in Bohol + Things To Do

22 Places to Visit in Puerto Princesa + Things To Do