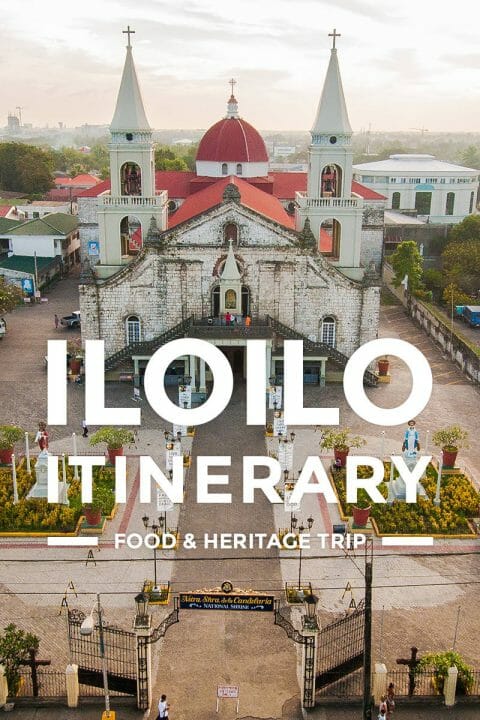 Traveling to Iloilo for a full day? Here’s an easy do-it-yourself itinerary that you can follow.

Get acquainted with the major cultural and historical sights in Iloilo City and towns that dot the southern coast of the province.

Followed by a map guide, recommended places to stay & extra tips that can help you save money and time.

Before we go on with the actual itinerary, here is a list of things that you might need to prepare and bring for a hassle-free trip.

Hotels in Iloilo often get fully booked when there are major events and conventions happening in the city including Dinagyang Festival and holiday months. Book your room as soon as you know you are going because prices rarely go down the closer you are to your trip. Take advantage of options that offer instant confirmation and free cancellation if you are not yet sure with your travel plans right now.

Iloilo hotel reservation — Click the links below to compare room rates, discounts and read guest reviews by other travelers.

Iloilo flight ticket — Book a flight to Iloilo International Airport (ILO), which is a 20 to 30-minute drive away from the city proper.

Google Maps — This travel app will make it a lot easier to navigate around Iloilo on your own. The directions feature only works online. Make sure to get a mobile data internet plan to stay connected during your trip

Make sure to read the step-by-step tips posted. This guide can help you enjoy a do-it-yourself (DIY) trip, even on your own. See the route map to find your way around easily.

You can start early by taking a morning flight to the sprawling Iloilo International Airport. A shuttle to the city center takes under 30 minutes. 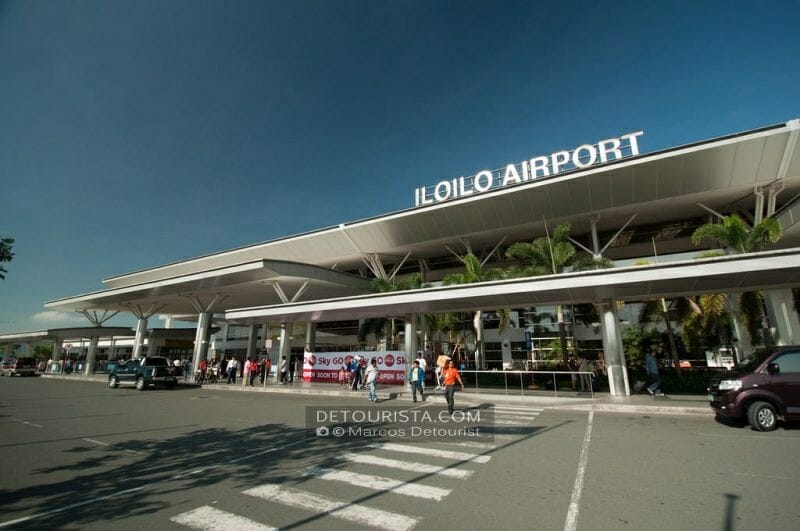 Iloilo flight — Earliest flight from Manila is around 4am. Fly with Cebu Pacific or Philippine Airlines.

After checking-in your hotel, head straight to La Paz Market for a hearty breakfast of La Paz Batchoy, Iloilo’s most famous local dish. Get your caffeine fix a few stores down at Madge’s Cafe, a family-owned coffee shop that brews fresh locally sourced coffee, or indulge in a special dessert treat at the row of “halo-halo” stalls near the entrance of La Paz Market. 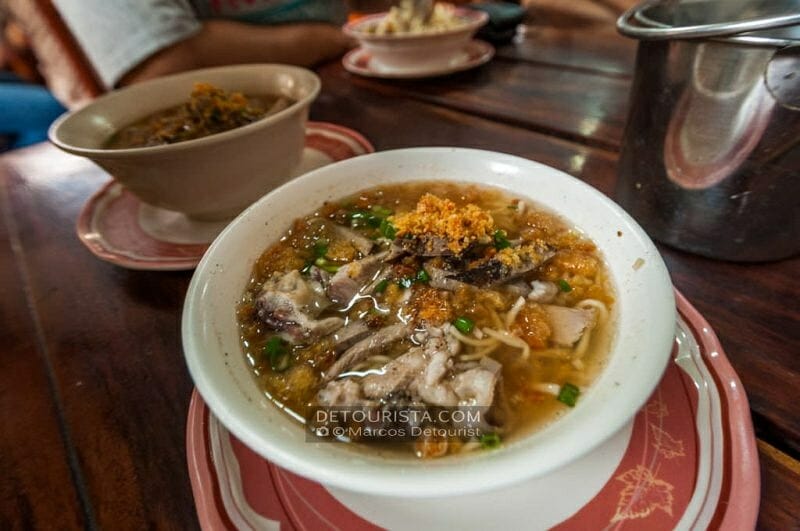 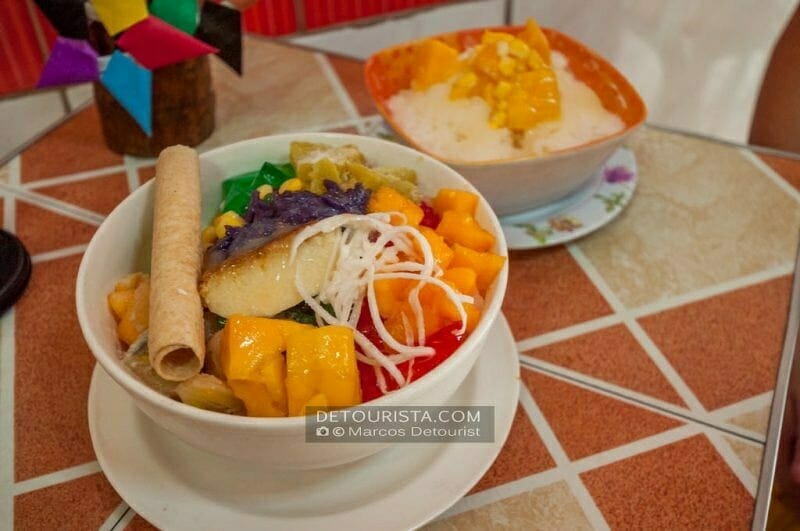 Halo-halo with Barquillos and leche flan

Transport to La Paz Market — Taxi fares within the city usually costs from P70 to P150. You can travel cheaper by taking the jeepney (P8 minimum fare). Simply ask your hotel or locals for directions. The majority of Ilonggos are always willing to help if you ask nicely.

Breakfast at La Paz Batchoy stalls — Take your pick from Ted’s or Deco’s located on the roadside, or Netong’s found inside the market. P55 to P80+ for one bowl of Batchoy. If you feel lost navigating the inner pathways of the market, just ask the vendors how to get around. The locals are almost always willing to help.

Hop on a jeepney to Iloilo southern coast, where many of the province’s most exquisite centuries-old churches can be found. A morning visit is recommended if you want to take photos of the churches’ facade under the best light. Go the whole stretch to the southernmost town, San Joaquin, or skip to the main course — the Miagao Church, a UNESCO World Heritage Site. 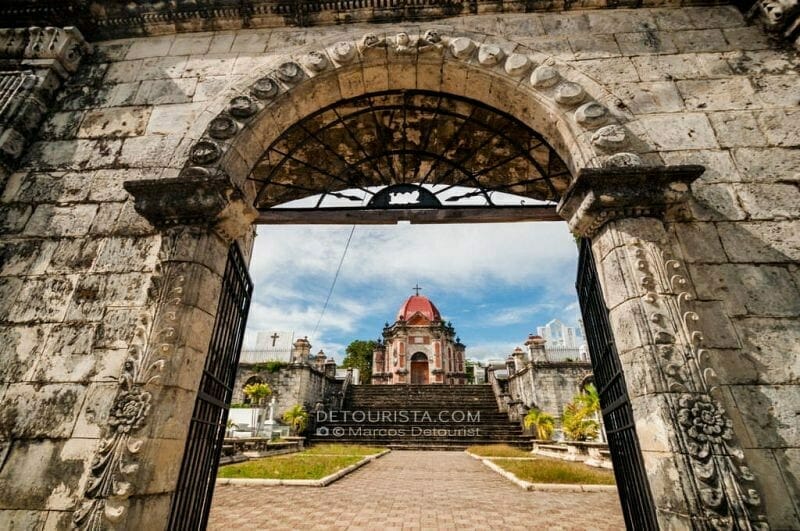 San Joaquin Cemetery is one of the best preserved Spanish-colonial cemeteries in Iloilo. 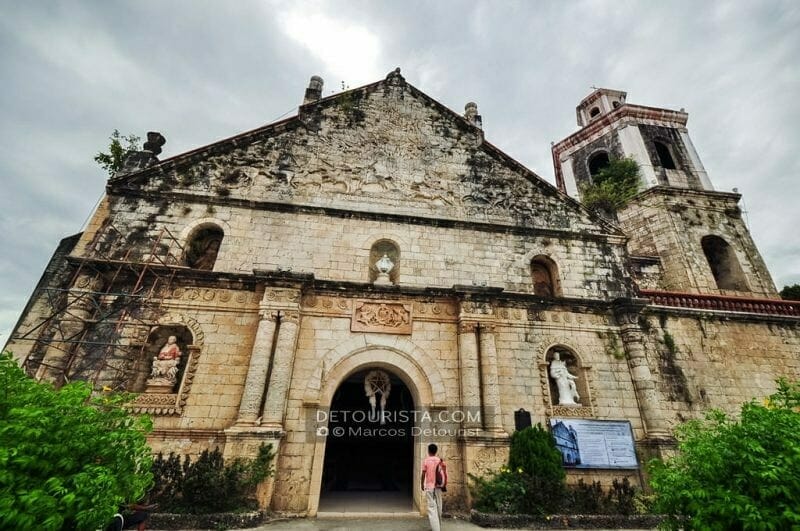 Remarkable for its military theme sculptural relief, the San Joaquin Church is a National Cultural Treasure.

Transport from Iloilo City to San Joaquin — Cross the street from the Rizal St. entrance of La Paz Market and ride a “Jaro Liko” jeep to University of San Agustin along General Luna St. (P8 fare). Then, ride a “Villa/Arevalo” jeep and drop off at the jeepney stop near Iloilo Supermart Molo (P8 fare). Ride a “San Joaquin” jeep to San Joaquin town (P60; 45 minutes). Drop off at San Joaquin Cemetery

Ride tricycle (motorized rickshaw) from the cemetery to the town proper — P7 fare; less than 5 minutes. 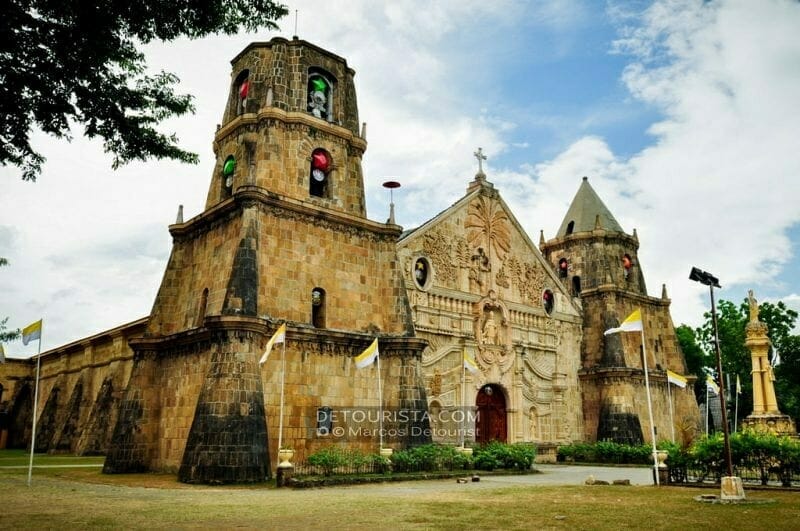 Transport from San Joaquin to Miagao — Walk (5 minutes) or ride trisikad (cycle rickshaw; P7 fare) to the highway intersection. Ride a “Miag-ao” or “San Joaquin” jeepney to Miagao town (P10 to P15 fare; 15 to 20 minutes). Drop off at Miagao Church.

Have a meal break on your way back to the city. Here are some options in different towns you will be passing by: Sulu Gardens in Miagao, South Park Grill in Guimbal, Allan’s Talabahan in Oton. They are conveniently located along the highway. You can also eat at Villa Beach in Iloilo City. Tatoy’s Manokan and Seafood, Breakthrough or Erning’s Lechon are the top choices. To get to Villa Beach. Ride a “Villa/Arevalo” jeep from Arevalo District Plaza. The jeepney stop is located on the other side of the plaza, beside the Iloilo Supermart Arevalo Branch or the covered gym. You may ask the locals if you are having trouble finding it.

Ride jeepney to Iloilo City — You can also make a few stops & visit more churches that you will be passing by. All jeepneys follow the same route, so you can hop on and off easily. Once you reach the city boundary you will be dropped off at Mohon Terminal, where you can ride a “Villa/Arevalo” jeep to the city center.

The City of Iloilo is home to, not only beautiful old churches but also other heritage structures like ancestral houses and institutional buildings. Almost all of the city’s districts has a Spanish-colonial church and a plaza because they used to be separate towns before they were merged into one city.

On your way back to the city, drop off at Camiña Balay nga Bato for a tour of the heritage house capped with an invigorating taste of native hot tsokolate. Proceed to Molo District Plaza, where you can find Molo Church, and then explore the many sights of Plaza Libertad in the City Proper District. 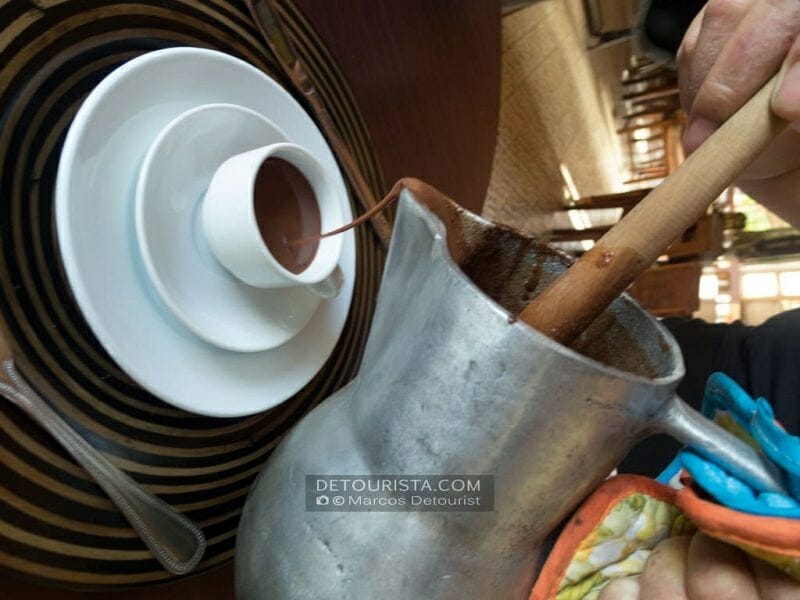 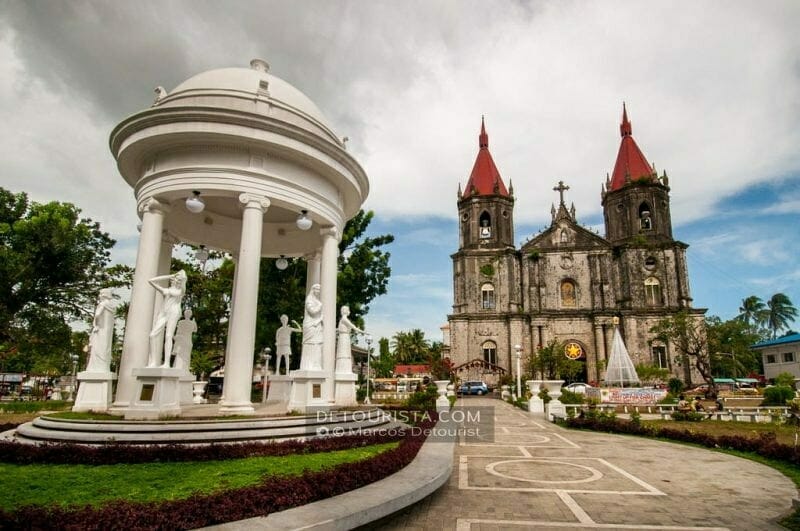 From Plaza Libertad, walk down Calle Real, now known as JM Basa Street, for a stroll down memory lane. During the era of Iloilo’s booming sugar industry up until the 1980s, Calle Real was the commercial and shopping center of the city. Many of the city’s heritage commercial buildings and monuments can still be seen along this historic road. Then, ride a jeep to the Arroyo fountain fronting the Old Iloilo Provincial Capitol and walk your way to Museo Iloilo, one of the city’s iconic landmarks. 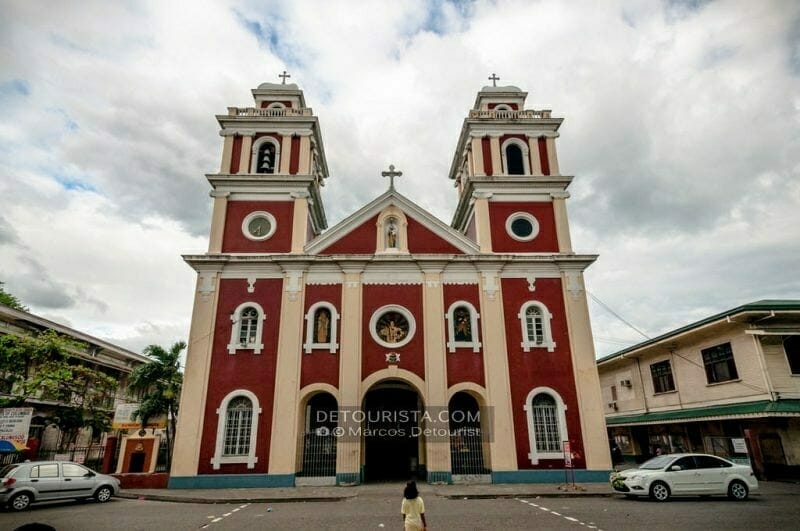 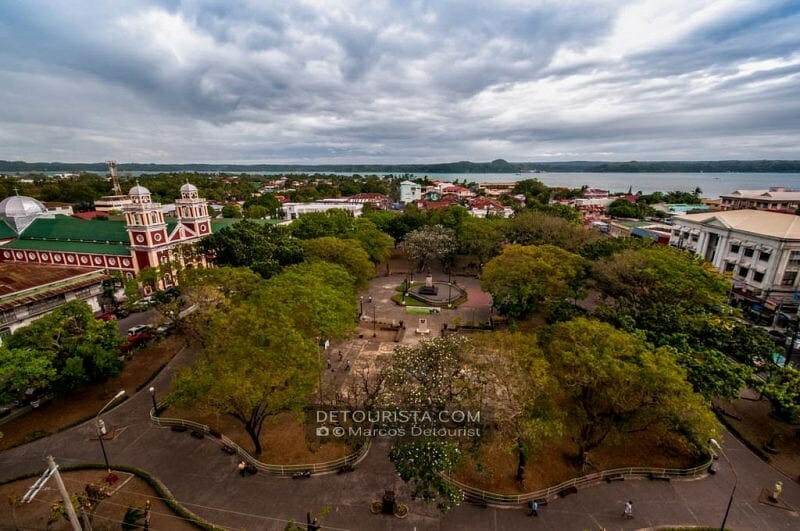 View from the rooftop of the Iloilo City Hall facing Plaza Libertad and Guimaras Island. View from the rooftop of the Iloilo City Hall facing the Iloilo River. 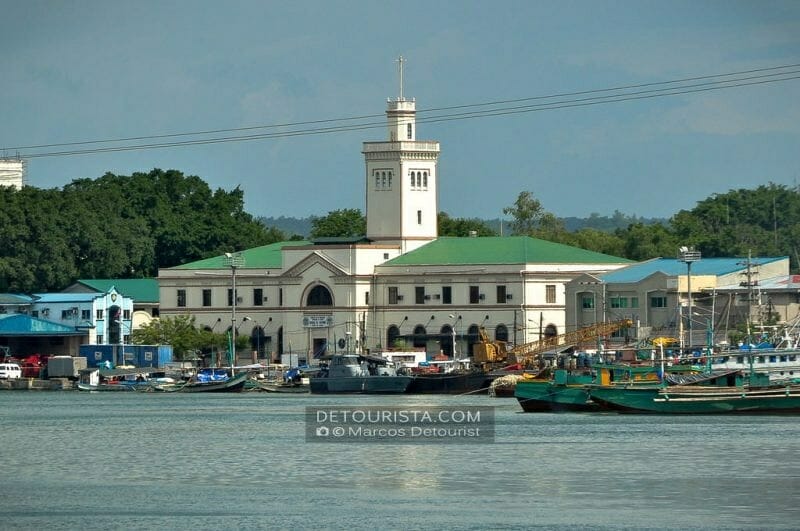 Iloilo Customs House (Aduana) built along the banks of the Iloilo River. 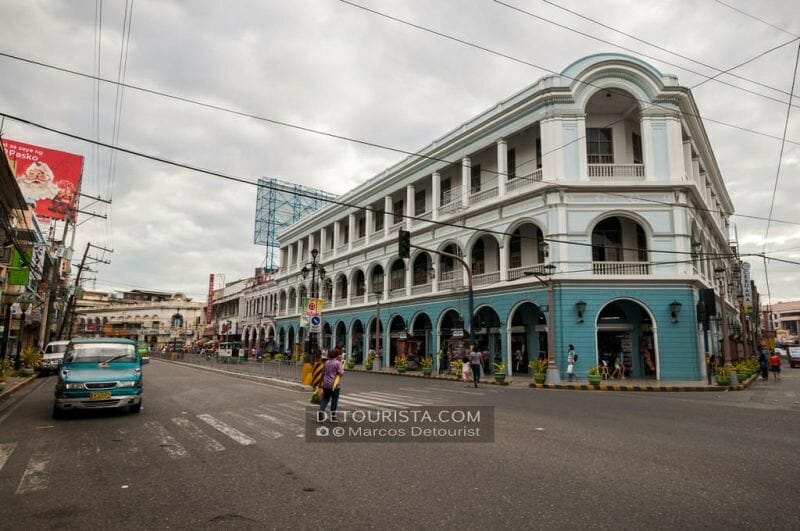 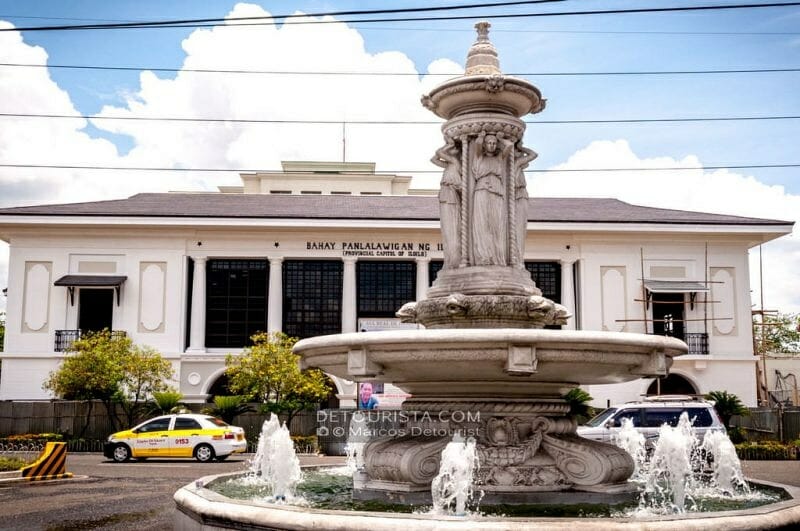 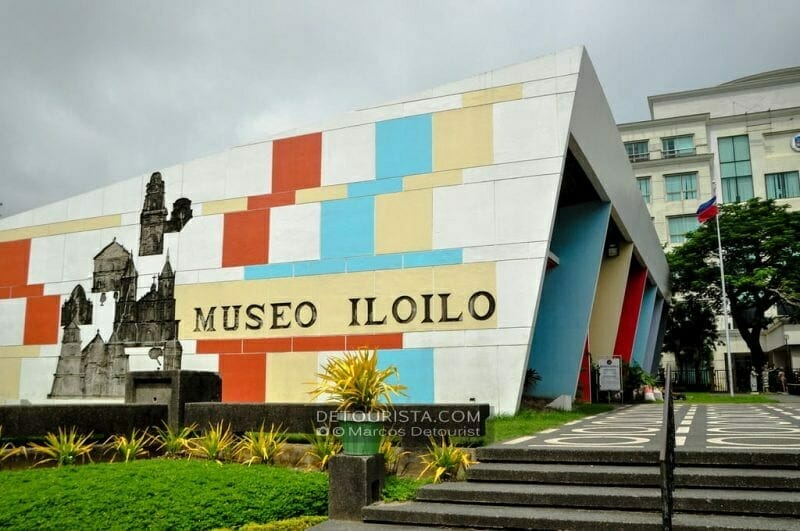 Calle Real — Walk along JM Basa Street to The International Hotel Building (corner of JM Basa and Guanco Streets) or walk all the way to the Plazoleta Gay (rotunda with the obelisk monument in the center).

Continue to Jaro District, where you can find many old ancestral houses in addition to visiting the Jaro Cathedral and Belfry. 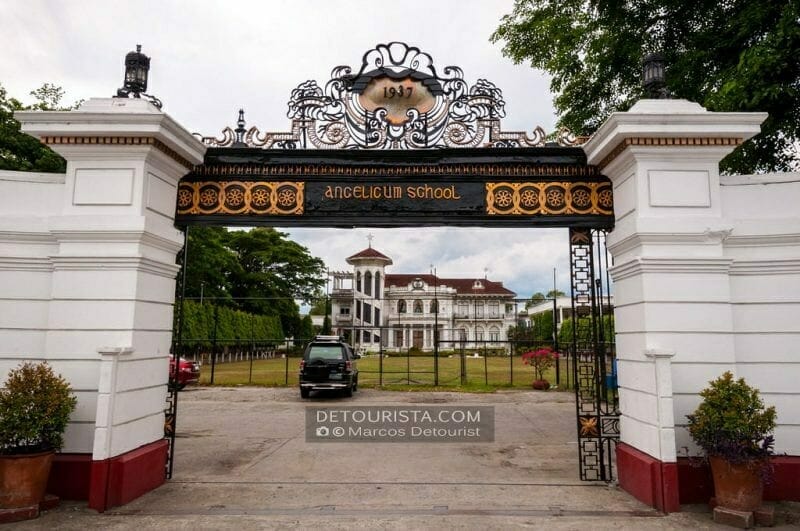 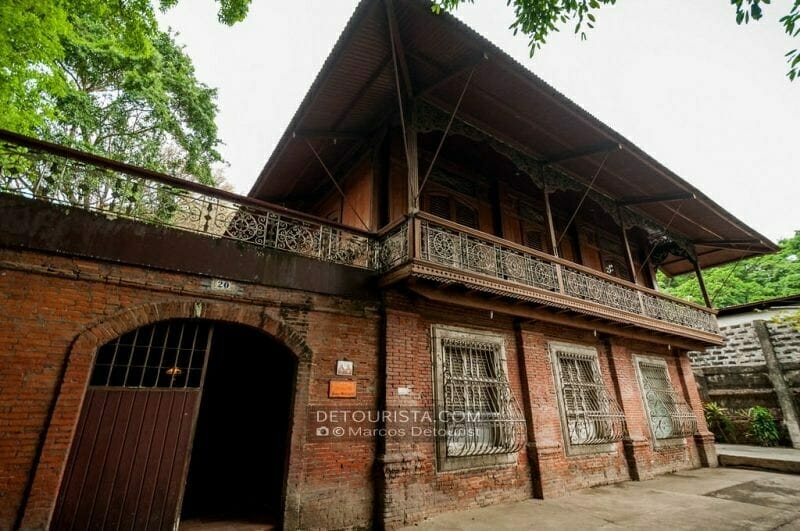 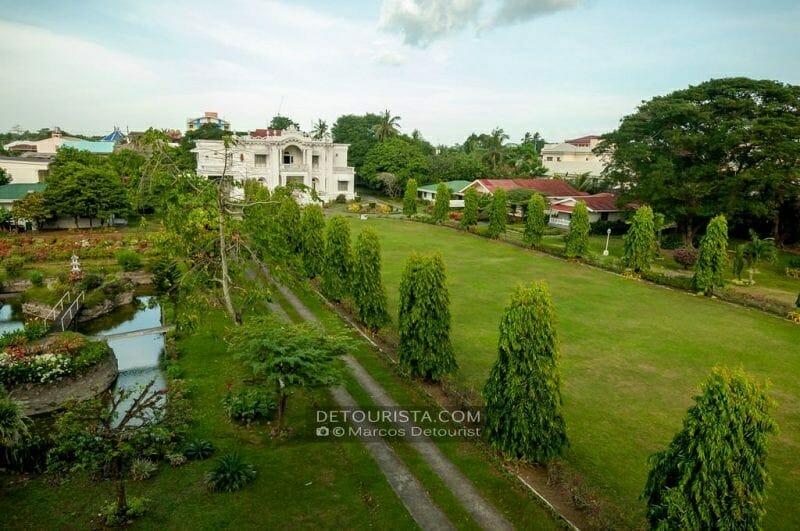 Nelly Garden, one of the Lopez Family’s grand old houses in Iloilo. 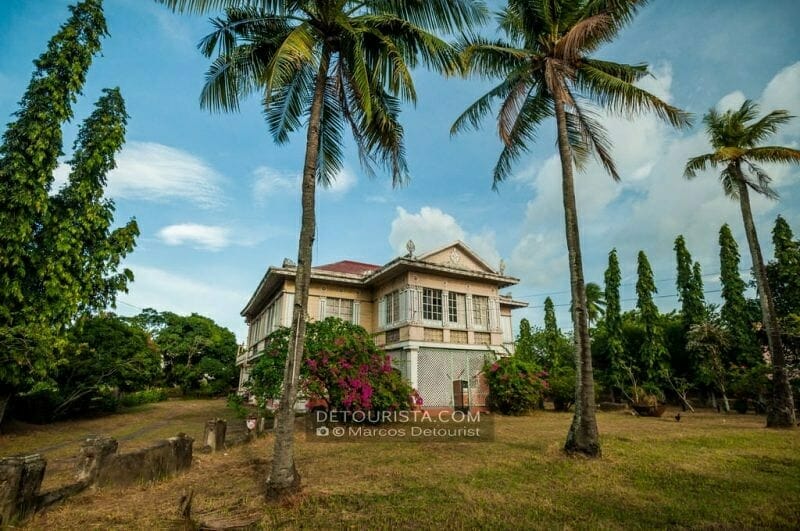 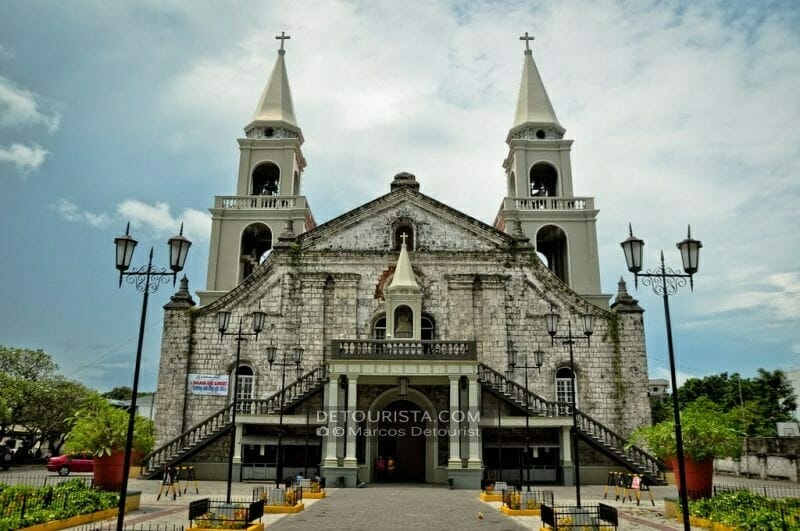 Jaro Cathedral, the religious seat of power in Western Visayas. 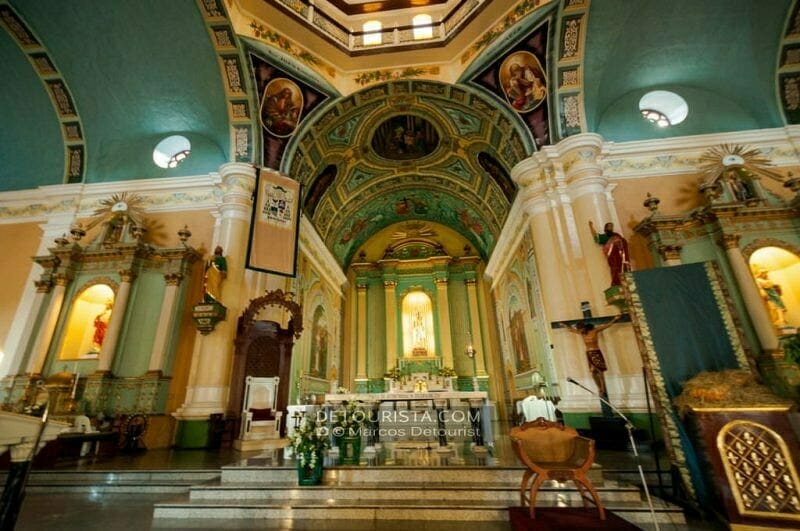 Interiors of the Jaro Cathedral 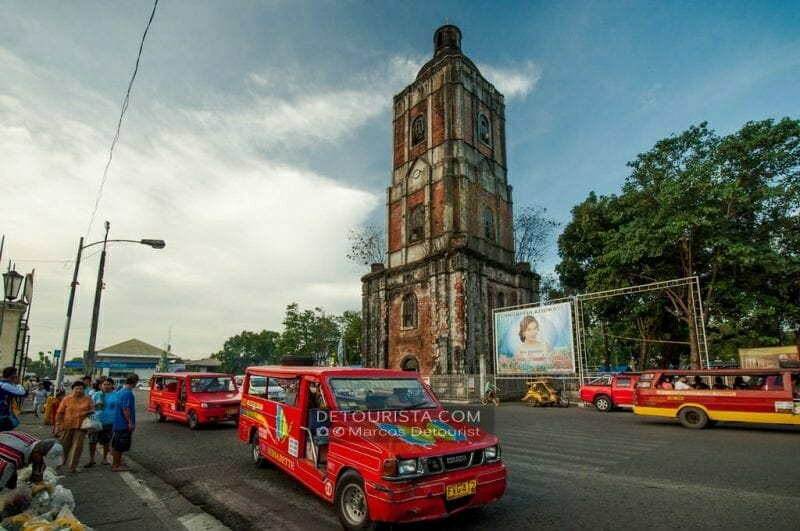 Jaro Belfry located across the street from the cathedral.

Casa Mariquit — Found along a narrow alleyway beside Shell Gas Station, near PRC Regional Office. Go inside and look for the caretakers of the house. No entrance fee is charged but tipping the caretakers is expected after the tour.

Ride “Jaro CPU” jeep from the jeepney stop located on the other side of Jaro Plaza, in front of Andoks (P8 fare). Drop off at Lizares Mansion (now the Angelicum School).

Spend your late afternoon with a leisurely sunset stroll along the Iloilo River Esplanade and then treat yourself to a nice dinner at Smallville Complex, Plazuela de Iloilo or Iloilo Business Park by Megaworld, which are among Iloilo’s best dining strips. 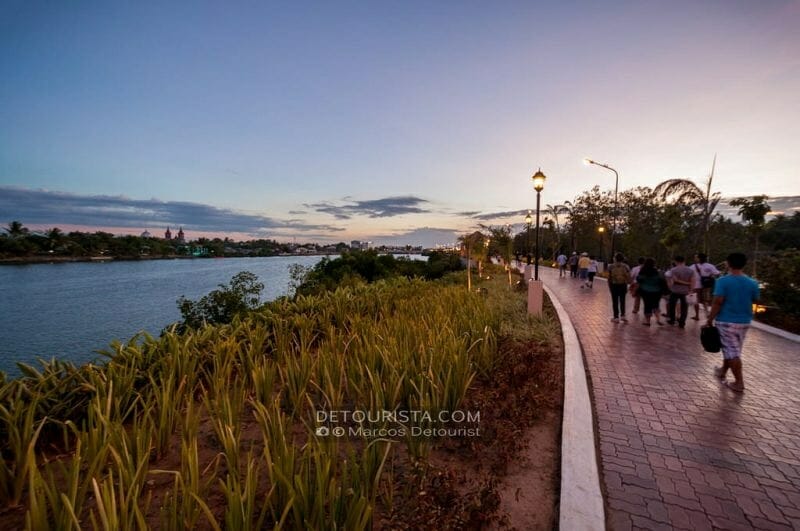 Iloilo River Esplanade — The best views are at the middle of the esplanade.

Dinner at Smallville, Plazuela de Iloilo or Iloilo Business Park by Megaworld — These areas offer a wide variety of dining options from the local flavors to international cuisines. Choose among these top options:

Travel tips before you go

Where to stay in Iloilo?

Book your stay with these top-rated resorts, hotels, hostels & pension houses in Iloilo. Click the links below to see rates, discounts and read guest reviews. 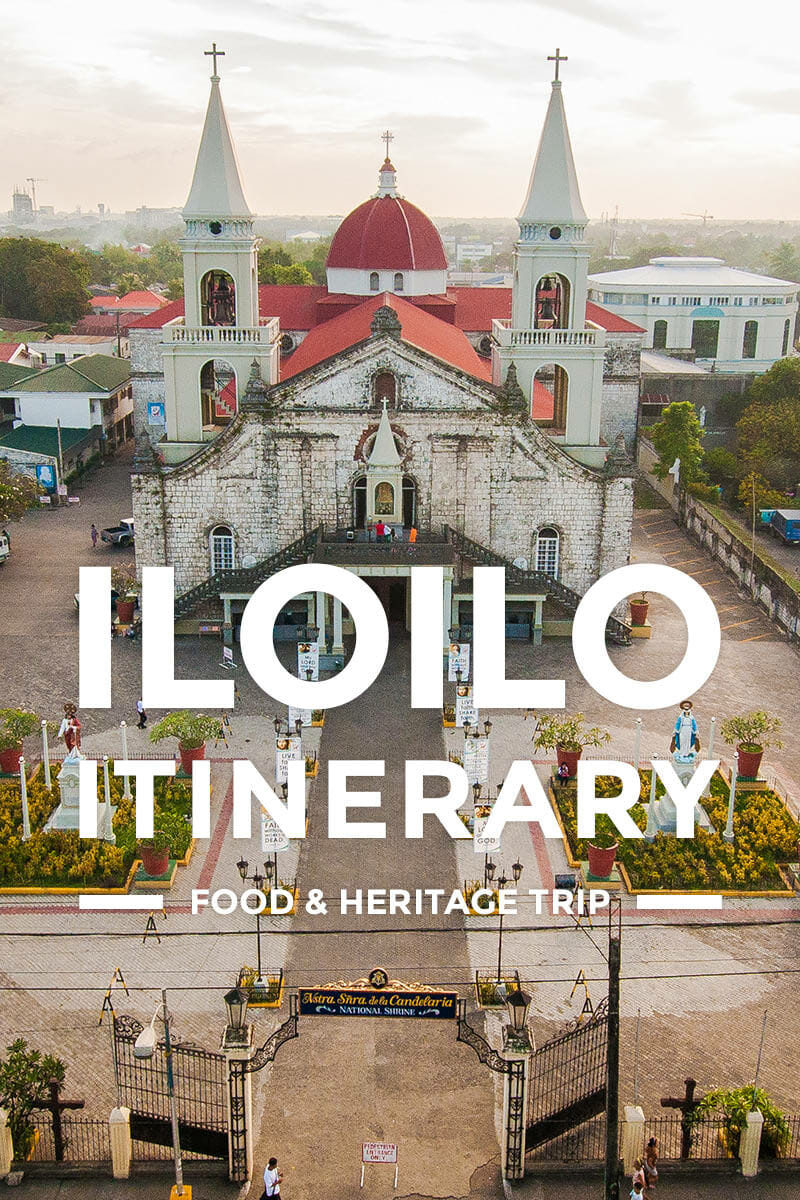 Hong Kong Itinerary with Macau, Disneyland & Ocean Park Tour…
Singapore Itinerary with Legoland Malaysia & Universal…
Everest Base Camp Trek + Itinerary Guide for First-Timers
32 Places to Visit in The Philippines + Things To Do for…